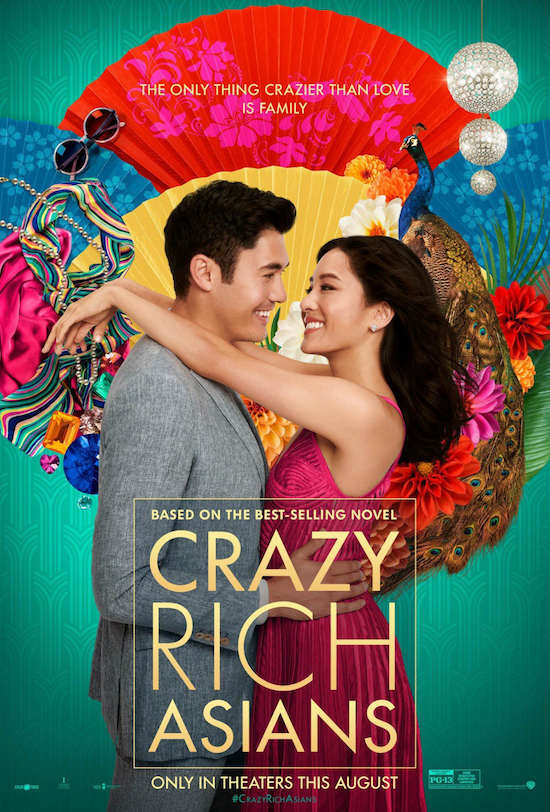 Screenplay: Peter Chiarelli, Adele Lim, based on the novel by Kevin Kwan

Synopsis: Crazy Rich Asians follows native New Yorker Rachel Chu (Constance Wu) as she accompanies her longtime boyfriend, Nick Young (Henry Golding), to his best friend’s wedding in Singapore. Excited about visiting Asia for the first time but nervous about meeting Nick’s family, Rachel is unprepared to learn that Nick has neglected to mention a few key details about his life. It turns out that he is not only the scion of one of the country’s wealthiest families but also one of its most sought-after bachelors. Being on Nick’s arm puts a target on Rachel’s back, with jealous socialites and, worse, Nick’s own disapproving mother (Michelle Yeoh) taking aim. And it soon becomes clear that while money can’t buy love, it can definitely complicate things.

Review: Easily the most talked-about movie to hit local theatres in months, Crazy Rich Asians comes with a lot of additional baggage for its Singapore release. After all, Kevin Kwan’s bestselling novel is set in Singapore, and this movie adaptation features not only many glamour shots of Singapore, but also a whole slew of Singaporean actors. One cannot deny the initial thrill of seeing this many familiar faces and places in a true-blue Hollywood production, but once the rush fades, is Crazy Rich Asians actually a good movie? The answer is… kind of.

At its heart, Crazy Rich Asians is simply a good old-fashioned fish-out-of-water romantic comedy, containing almost every trope that a film of the genre would (or should) have, which makes the film quite enjoyable at its most basic level. It helps that Golding and Wu share a good onscreen chemistry, and in particular Wu’s engaging performance would make audiences root for her from very early on in the proceedings. However, it’s Michelle Yeoh that truly impresses as Eleanor, and she’s transformed the stern matriarch from a rather one-dimensional villain into a complex, believable character who values family above all else.

Kevin Kwan’s novel was a sprawling book with many characters, and while Chiarelli and Lim’s screenplay tries its best to corral the narrative, the film is an uneven one, especially whenever the central couple spends time apart and the film gets caught up with one of the many underdeveloped subplots. Particularly under-baked is the troubled relationship of Astrid and Michael, which is a pity because both Gemma Chan and Pierre Png seem to have so much more to offer. And while there are many recognizable faces for most Singaporean audiences, none of the other supporting cast members leave much of an impression apart from Awkwafina (effortlessly stealing the limelight just like in Ocean’s 8) as Rachel’s college friend Peik Lin and Nico Santos as Nick’s gay cousin Oliver.

There has been some blowback amongst locals regarding the underrepresentation of minorities in Singapore in the film, but the fact of the matter is that this is after all a Hollywood production of a novel that didn’t make any minority representation in the first place. It’s a film that’s made with American sensibilities in mind, and any illusions that this is a “true” Asian film should have been cast aside from the beginning. There are plenty of Asian filmmakers making Asian films with Asian casts, so why would we even look to this Hollywood film to make this kind of representation for us? It’s an unnecessary criticism of a show that’s not designed to be anything more than a romantic comedy that appeals to the masses.

And mass appeal is what Crazy Rich Asians has in spades. It is a film that has something for almost everyone while not really excelling in any one aspect – it has some luxury and food porn, a somewhat engaging central romance, occasionally entertaining comedic sequences, and familial moments that would resonate with some Asian audiences. It’s great that the film has performed well in the US domestic market (and I foresee it doing well in Singapore as well), which importantly keeps the door open for future shows with stronger Asian American representation. This is no Black Panther or Get Out, to be sure, but it’s legitimately entertaining fluff as long as one goes in with the right expectations.