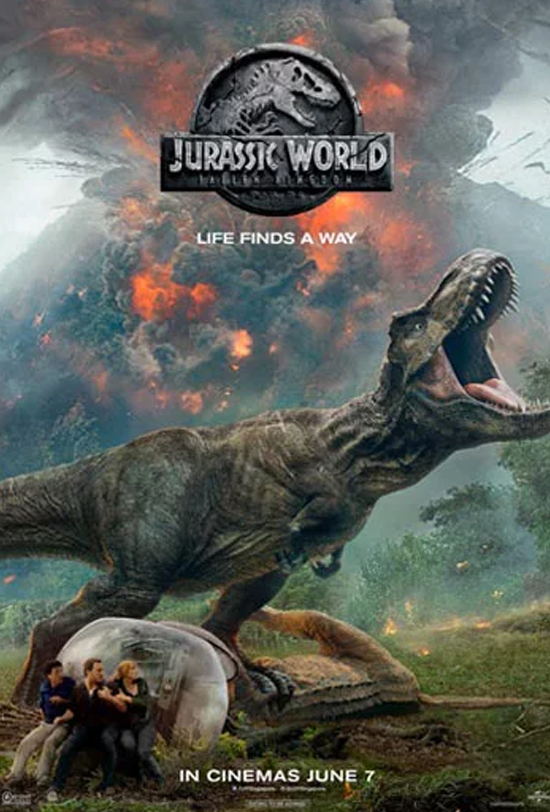 Synopsis: Three years after the destruction of Jurassic World, Owen Grady (Chris Pratt) and Claire Dearing (Bryce Dallas Howard) return to the island of Isla Nublar to save the remaining dinosaurs from a volcano that’s about to erupt. They soon encounter terrifying new breeds of gigantic dinosaurs while uncovering a conspiracy that threatens the entire planet.

Review: Back in my review of Jurassic World in 2015, I had commented that there didn’t seem to be much narrative space left in the Jurassic Park/World universe to warrant a fifth film. Given the massive box office success that Jurassic World was (a staggering US$1.6 billion), however, it was only natural that a sequel would be planned. Fast forward three years later, and the resulting film is Jurassic World: Fallen Kingdom, which wisely moves the action out of the theme park setting but doesn’t take the franchise anywhere it hasn’t already been. While visuals are top notch and director J.A. Bayona has managed to create a number of effective “close quarters” set-pieces, there’s this nagging sense that the movie is an extraneous one, except that it has a very big budget to play with.

The focus of the Jurassic franchise has never been the human actors, and once again the leads are passable but not memorable. While Chris Pratt’s Owen Grady was still quite refreshing the first time round, the fact that we’ve seen the same Dude persona in three Marvel movies plus the previous Jurassic World means that the charm is wearing off. Bryce Dallas Howard reprises her role but has even less to do this time round. The newcomers barely leave a dent despite a pretty persistent presence in the film, likewise for some of the more recognizable faces like Jeff Goldblum, James Cromwell and B.D. Wong.

What does impress in Fallen Kingdom remains the dinosaurs – it seems quite clear that J.A. Bayona was aiming for more believability than the previous film, and there’s a lot of animatronic work on top of excellently rendered dinosaurs. This is a definite improvement over Jurassic World, and there are moments where the use of puppets over CG helps make interactions between humans and dinosaurs feel more authentic. And while the action is largely predictable, the major set-pieces are actually genuinely thrilling, particularly the opening reel as well as the latter scenes involving the Indoraptor.

Unfortunately, Fallen Kingdom seems to lose momentum in its final half hour, and the denouement feels underwhelming given the rather extensive buildup. The fact that most of the dinosaurs are seen confined in very small spaces doing nothing for much of the movie is also quite disappointing, especially since the film prides itself on featuring the most species of dinosaurs in the franchise’s history. Taken as a summer action blockbuster, Fallen Kingdom still manages to deliver, but it will not hold up to closer scrutiny nor stand the test of time like the original Jurassic Park. The open-ended conclusion leaves the door open for another sequel, but if the franchise doesn’t do more to evolve, it will likely end up going extinct.