Synopsis: The Good Dinosaur asks the question: What if the asteroid that forever changed life on Earth missed the planet completely and giant dinosaurs never became extinct? Pixar Animation Studios takes you on an epic journey into the world of dinosaurs where an Apatosaurus named Arlo (voice of Raymond Ochoa) makes an unlikely human friend called Spot. While traveling through a harsh and mysterious landscape, Arlo learns the power of confronting his fears and discovers what he is truly capable of.

Review: The Good Dinosaur revolves around one central “what if?” – what if the asteroid that wiped out the dinosaurs never hit Earth, and dinosaurs managed to survive for millions of years more? Although an interesting proposition, the story on show in The Good Dinosaur is extremely simplistic, and even in the hands of Pixar, the film very nearly feels like it’s a little too sparse in the plot department. Fortunately, it is Pixar after all, and the studio still manages to turn the film into a somewhat absorbing hour and a half, filled with cute critters, interesting vignettes and some of the best environmental animation I have ever seen in an animated film.

Although the setting is a bit off-kilter, the story of The Good Dinosaur develops in a very classic Disney style. After a rather predictable tragedy befalls Arlo’s family, Arlo gets (again, predictably) separated from his family and has to fend for himself – until he meets Spot. Yes, the reptile has a human pet, and this is just the beginning of a plethora of rather odd situations that film thrusts its viewers into. An extended sequence sees Arlo interacting with a family of T-Rex “cowboys”, and in one of the strangest sequences ever in a Pixar film, Arlo and Spot consume some hallucinogenic fruit and end up getting high on them. There’s a very good reason why the Good Dinosaur is rated PG, and parents of very young viewers may find this film to be somewhat unsuitable for their consumption.

Look past this general weirdness, and there are some gems to be found in the film. It’s filled with cute critters (and a number of rather disturbing ones) and there are sequences which are very fun to watch while not adding much to the main plotline. And to Pixar’s credit, they managed to include one extremely well executed sentimental scene where Arlo and Spot communicate their family history to each other with minimal dialogue. And whilst Arlo isn’t the most memorable central character in a Pixar film, the environmental animation certainly is. It’s incredible what Pixar managed to achieve here, with photorealistic environments that seem so lifelike I had to question if what I was seeing onscreen was culled from a nature documentary, and not digitally rendered 1s and 0s.

Despite all the visual splendor and a generally enjoyable viewing experience, it is undeniable that The Good Dinosaur firmly seats itself in the second-tier section of Pixar’s studio output. To have to follow an excellent film like Inside Out isn’t an easy thing to begin with, and the unyielding quirkiness of the storyline does the film no favours either. 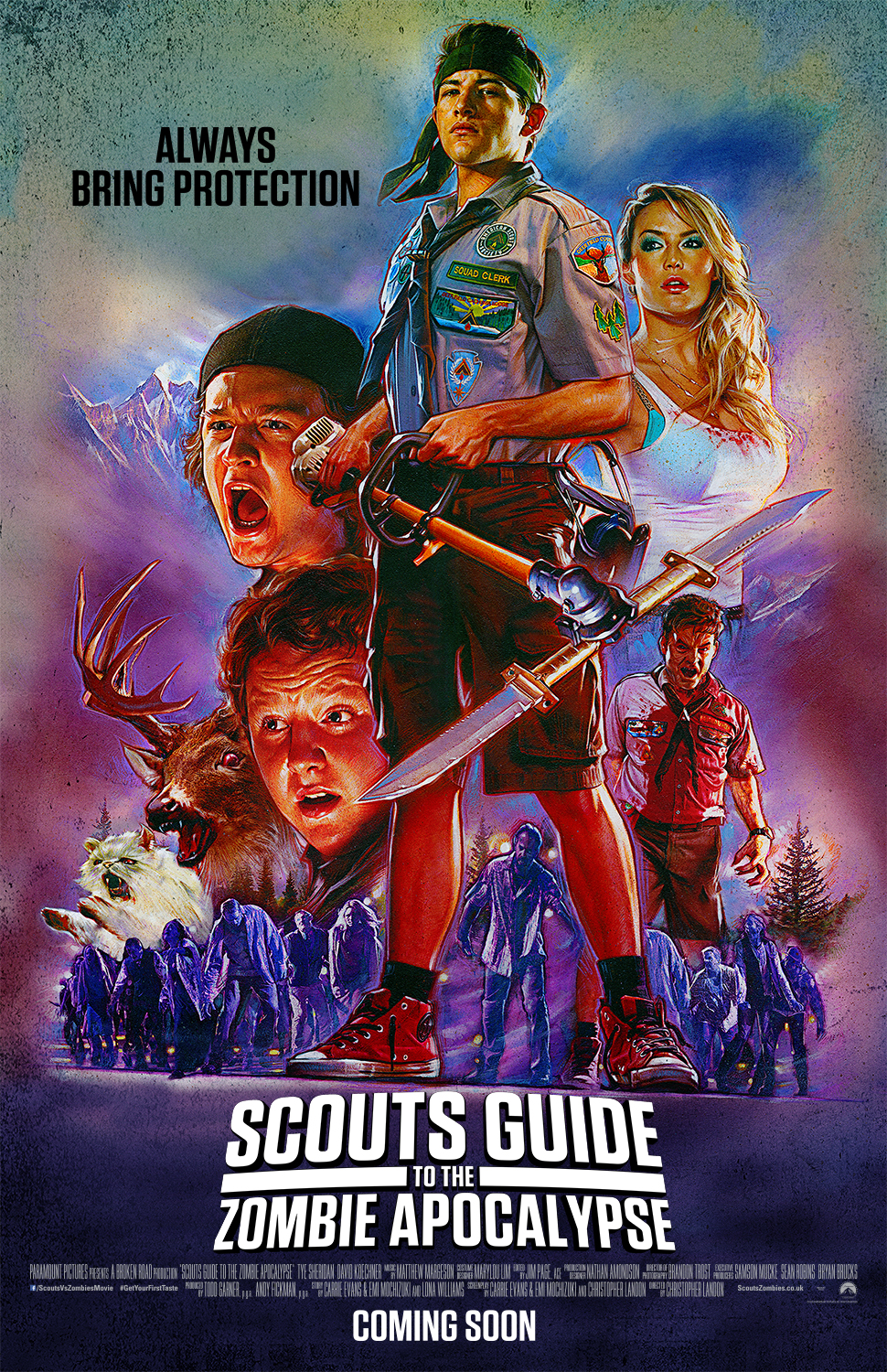 Synopsis: Three scouts and lifelong friends join forces with one badass cocktail waitress to become the world’s most unlikely team of heroes. When their peaceful town is ravaged by a zombie invasion, they’ll fight for the badge of a lifetime and put their scouting skills to the test to save mankind from the undead.

Review: It’s exceedingly clear that anyone shelling out money to watch Scouts Guide to the Zombie Apocalypse will have known in advance what they are getting themselves into – as long as one has watched any trailer of the film, they would know that this is more Scary Movie than a scary movie, and that age and enjoyment of the movie has an inverse relationship. Scouts Guide to the Zombie Apocalypse is unyieldingly sexist and puerile, proudly wearing its T&A badge on its sleeve, yet it still comes up somewhat short even when viewed forgivingly through the eyes of a teenaged boy who managed to sneak into the M18-rated movie.

While there are certainly great moments of gore, a small number of laugh-out-loud sequences and an excellent opening sequence, a lot of Scouts Guide is painfully predictable, and the film heads steadily downhill as it progresses. Fortunately, it’s a fast-paced and relatively short film, and the end credits starts to roll just as it begins to get tiresome. And despite its title (and its leads staying in uniform the entire time), the Scouting aspect plays a minimal role, which feels somewhat like a missed opportunity.

Synopsis: A cryptic message from Bond’s (Daniel Craig) past sends him on a trail to uncover a sinister organisation. While M (Ralph Fiennes) battles political forces to keep the secret service alive, Bond peels back the layers of deceit to reveal the terrible truth behind Spectre.

Review: Given the very high bar that Skyfall had set, it was perhaps an unreasonable expectation that Spectre would outdo its predecessor, even if the production remains largely in the same hands. And while it is true that Spectre is a number of notches below Skyfall, it’s still a very decent Bond movie, and is actually more of a Bond movie than Skyfall is. It’s almost as though Sam Mendes, having broken the mould with Skyfall, had decided that his sophomore Bond effort would instead be something that comes much closer to the roots of the franchise.

Spectre opens with a (literal) bang, and minus the rather lackluster Sam Smith title song, ranks as one of the top Bond opening sequences in the franchise’s entire 53-year history. Set in Mexico on the Day of the Dead, the first five minutes is an ingeniously choreographed one-take tracking shot (mad props to Hoyte van Hoytema, who replaces Roger Deakin as DP), followed by an extended, equally stunningly orchestrated action sequence that culminates in a helicopter doing loop the loops over Zocalo Square. This is just the first of a number of great action set pieces in Spectre, and on their own makes the price of entry worthwhile.

This is Daniel Craig’s fourth appearance as James Bond, and he has firmly established himself as the best modern day Bond, handily beating out Timothy Dalton and Pierce Brosnan by a mile in every aspect (Sean Connery is still the iconic Bond for an old Bond fan like me). However, the rest of the cast simply fail to measure up, with both Bond girls Monica Belluci and Lea Seydoux lacking chemistry with Craig, and Christoph Waltz being particularly flat and uninspired as uber-villain Franz Oberhauser. Surprisingly, it’s the minor cast members that make more of an impression, none more so than Ben Whishaw’s expanded appearance as Q, and Andrew Scott’s detestable turn as government bigwig Max Denbigh.

Unlike Skyfall, there’s never a sense that anything is really at stake in Spectre, and it’s hard to be vested in any facet of the film, especially since the conclusion of any Bond film is a foregone one. It is somewhat surprising that Spectre isn’t pared down to a more manageable length, since the near two and a half hour running time does no favours to the film, and I found my interest flagging a little at times. There is definitely enough going on to not make the film feel like a bore, but it almost feels as though Mendes and crew got a bit lost along the way in an attempt to pull out all the stops for the film.

This is rumoured to be Daniel Craig’s last outing as Bond, and in a way that may not matter, since Spectre manages to wrap up the four-movie story arc quite nicely. It would not be surprising if this film becomes the end of yet another era, and a seventh actor will step up to take the mantle in the 25th Bond film. Although this isn’t the best Bond film in the Daniel Craig era, it will still be a decent swansong for the actor, and a tough act for the next James Bond to follow.