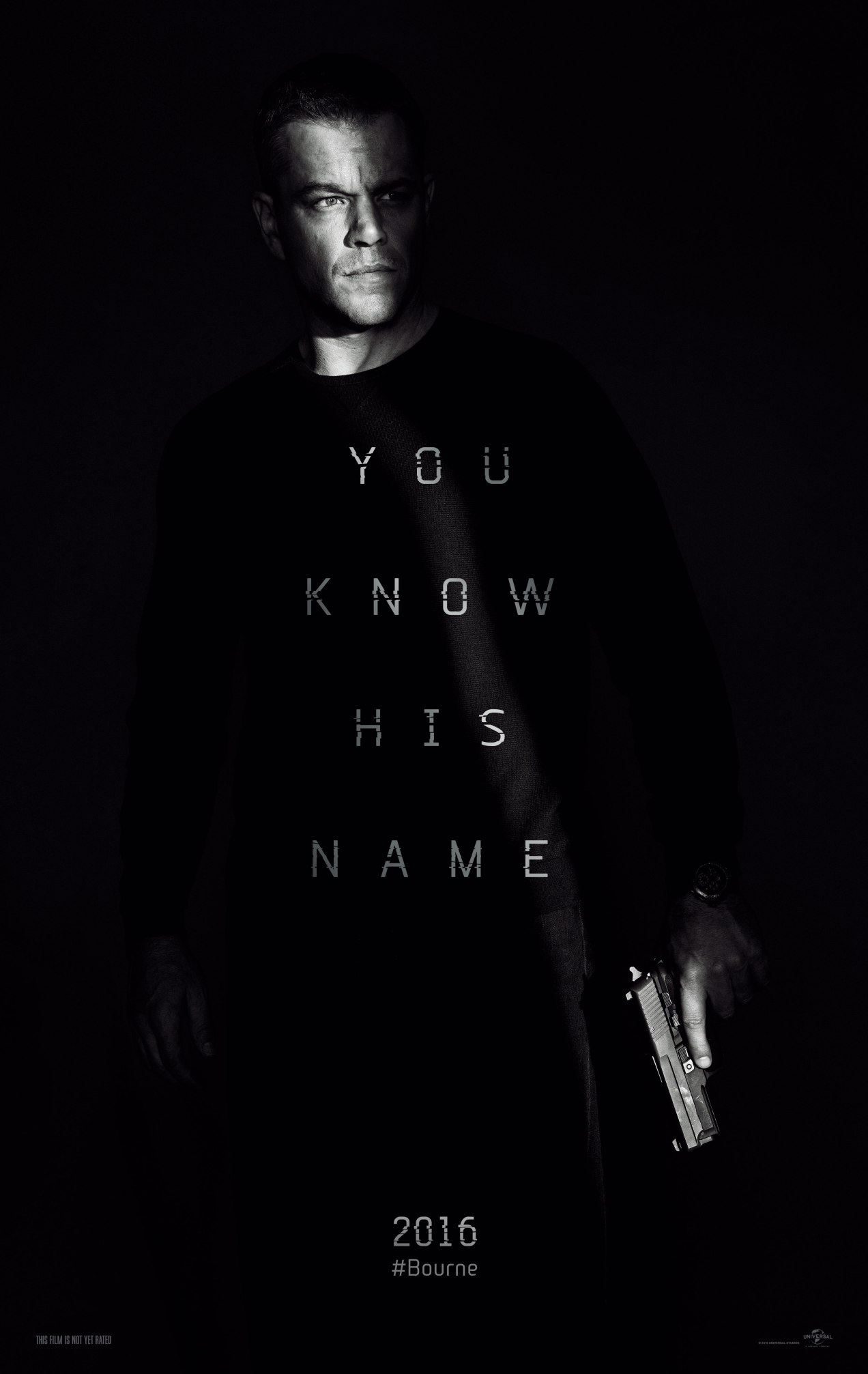 Synopsis: Matt Damon returns to his most iconic role in Jason Bourne. Paul Greengrass, the director of The Bourne Supremacy and The Bourne Ultimatum, once again joins Damon for the next chapter of Universal Pictures’ Bourne franchise, which finds the CIA’s most lethal former operative drawn out of the shadows.

Review: I’ve never enjoyed films that overemployed the use of shakycams, because I firmly believe that cinema verite can be achieved without having to nauseate your audience. While shakycams can be used to good effect in found footage films, an action movie like Jason Bourne shouldn’t have to resort to such a measure. Those familiar with the two prior Paul Greengrass-helmed Bourne movies would probably have come prepared (as did I), but the film not only left me feeling mildly ill, it also left me feeling dissatisfied despite Greengrass’ and Damon’s return to the franchise.

While there has been an additional Bourne movie (The Bourne Legacy in 2012, starring Jeremy Renner), most Bourne fans would really only recognize the Bourne Ultimatum as canon – this means that the “real” Bourne has not appeared on the big screen for almost a decade. The formula remains largely the same, but something seems to have been lost in the nine years. Greengrass has added too much bluster to the proceedings, and in the midst of car crash after car crash after car crash, the script seems to have forgotten to give Damon’s Bourne any room for performance or introspection, diluting what was one of the strongest aspects of the original trilogy.

While the action sequences are well-choreographed, the dizzying camerawork and rapid-fire editing leaves much to be desired. The Athens chase scene near the start is the highlight of the film, but by the time the near 40-minute long chase sequence in Las Vegas takes place in the final reels, exhaustion has set in, and no matter how grand each successive crash is, it simply doesn’t feel rousing anymore. The only bright spot was an impressive hand-to-hand combat sequence between Damon and Cassel that brings to mind similar visceral, hard-hitting scenes in the previous installments.

Coupled with a weak, suspense-less plot, there’s this general sense that Jason Bourne is an unnecessary sequel to a trilogy that had more or less given closure to the protagonist’s story. The denouement leaves the door open for another sequel, but there is very little compelling reason, based on what is seen here, to warrant yet another outing with the cast and crew. 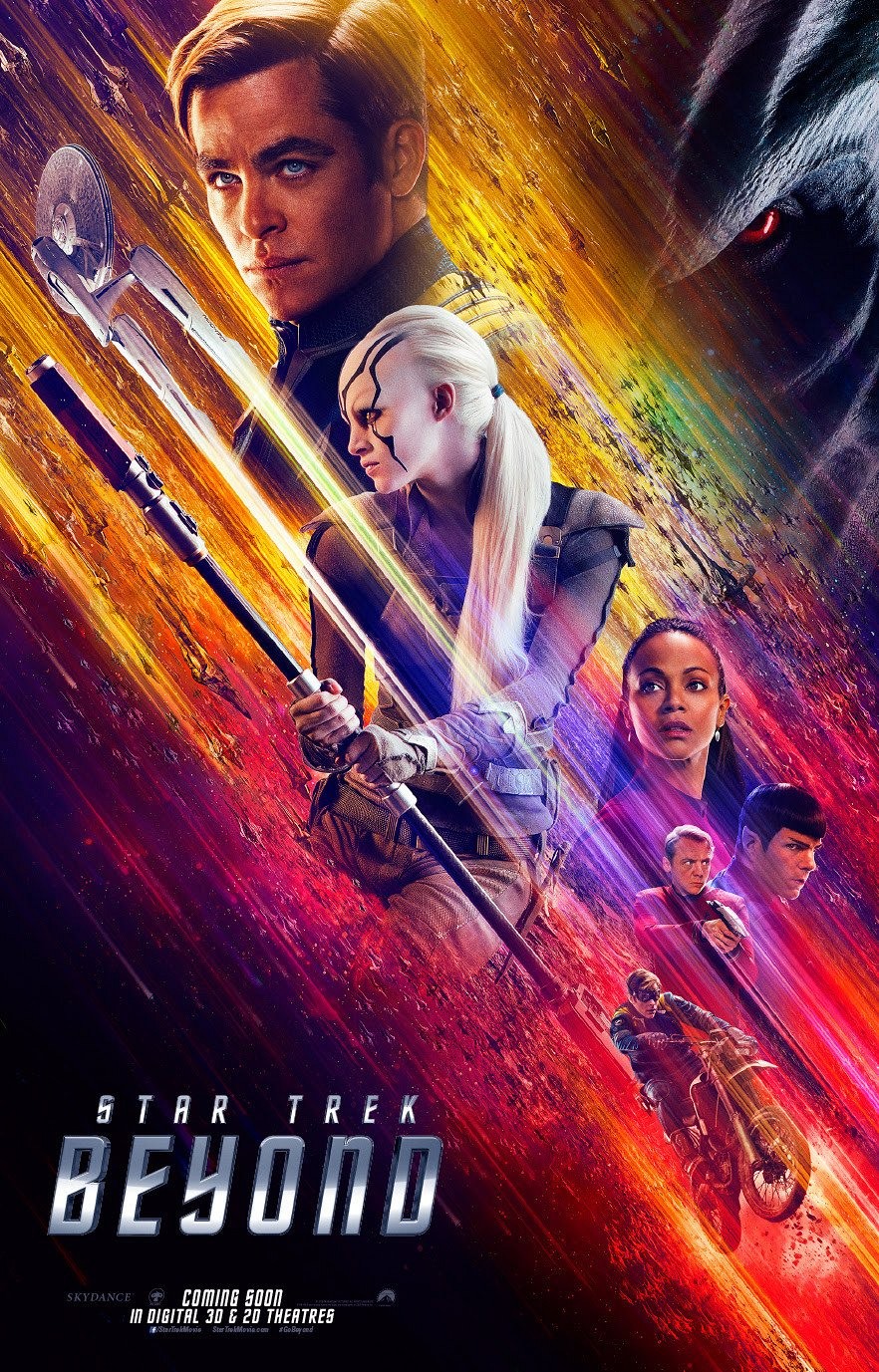 Synopsis: In Star Trek Beyond, the Enterprise crew explores the furthest reaches of uncharted space, where they encounter a mysterious new enemy who puts them and everything the Federation stands for to the test.

Review: The first post-reboot Star Trek movie not helmed by J. J. Abrams himself (directorial reins have been passed to Fast & Furious’ Justin Lin, while Abrams is preoccupied with Star Wars), Star Trek Beyond continues the winning streak that the new Star Trek franchise has been enjoying. It brings back everything that made the previous two films a success – a space adventure, comedy, excellent action set pieces and a great ensemble cast. However, the 13th movie in the Star Trek universe does seem to be spinning its wheels a bit, and instead of boldly taking audiences where they’ve never gone before, Star Trek Beyond ends up feeling more like an extended, big-budget episode of the various Star Trek TV series.

While Star Trek Beyond is ostensibly about the captain and the crew of the USS Enterprise, the bulk of the film actually takes place outside the starship. While it’s commendable that screenwriter-actors Pegg and Jung (who shows up as Sulu’s husband, another first for the franchise) for making this creative decision, it does detract somewhat from the “Star Trek experience” where you see all the core crew members of the USS Enterprise interact with each other. That is mitigated somewhat by deeper interactions within small pairings of the crew – Kirk with Chekhov (one of Anton Yelchin’s last roles before his untimely demise), Bones with Spock, Sulu with Uhura, Scotty and newcomer Jaylah (a very effective Sofia Boutella) and so on.

It is this aspect of Star Trek Beyond that truly seems to harken to the series’ TV roots, and despite the big budget and big effects, the film feels small in terms of plot and payoff, and the denouement doesn’t really move the needle either in terms of character or franchise development. The various Star Trek TV series had the luxury of time to build characters and storylines week by week, which is not the case in a summer blockbuster film with a running time of just over two hours, and Star Trek Beyond’s narrative suffers a little due to this.

Justin Lin is an old hand at action sequences, and while it does take some time to get started, the action set pieces are indeed quite well done. Be it an extended unarmed combat sequence, or massive dogfights in space, the action is consistently engaging and thrilling, though it can come across as being slightly confusing at times. 3D looks like it’s another post-production conversion and there was very little in terms of dimensionality that would make shelling out extra for a 3D screening. The soundtrack by Michael Giacchino does its job a little too well at times, and can come across as being just slightly overbearing in key moments of the film. The song choices for the film are quite inspired, however, and feature an excellent, highly memorable use of the Beastie Boys’ “Sabotage”.

Star Trek Beyond is certainly an entertaining Summer blockbuster, and should be able to appeal to general audiences and Trekkies alike. It may not mark a high point in the post-reboot canon, but it has at least maintained the momentum the franchise has gained since 2009. With the new TV series coming in 2017, and the likelihood of at least a fourth film with the current cast, it certainly looks like Star Trek has quite a bright future ahead.

Synopsis: Thirty years after the original film took the world by storm, Ghostbusters is back and fully rebooted for a new generation.  Director Paul Feig combines all the paranormal fighting elements that made the original franchise so beloved with a cast of new characters, played by the funniest actors working today.

Review: Paul Feig has had a pretty good track record so far of crossing genres with comedy with female-centric films (The Heat, Spy), and while Ghostbusters follows in the same vein, it isn’t quite as successful a venture as his previous outings. The fault doesn’t lie on the female leads however, but to the script trying too hard to reference the original film at every turn. It’s still a relatively entertaining Summer film, but ends up feeling somewhat like a missed opportunity.

While this is a reboot of the 32-year old Ghostbusters, the clear difference is that instead of a team of male comedy actors, Feig has decided to go with a team of female comedy actors. It has created a rather vicious backlash but in my opinion (and this is coming from someone who literally grew up watching Ghostbusters multiple times) it doesn’t hurt the movie at all. McCarthy and Wiig both seem a little muted in their performances here, however, and though their friendship is positioned as being central to the plot, it actually ends up being a non-starter. Leslie Jones is unfortunately playing a rather stereotyped black character, but she does the best she could within the confines of the role. The true gem in the cast, however, is Kate McKinnon, and her portrayal as the eccentric Holtzmann brings some of the best lines and big laughs in the film. The four women also share an affable chumminess onscreen, and in spots where the script starts to sputter, the movie survives purely on the goodwill generated by the quartet’s presence.

One of the biggest challenges that Feig and co-writer Dippold probably dealt with for the remake is the amount of baggage that comes with rebooting a much beloved franchise, and in this aspect they are only moderately successful. There seems to be an over-insistence on making unnecessary references to the original Ghostbusters (including walk-on roles for almost every surviving cast member of the 1984 film), and it really does needlessly encumber the film in many aspects, right down to the soundtrack. Of course, audiences that have not seen the film’s predecessors would probably not have the same response.

Visual effects have of course vastly improved over the past three decades, but Feig seems to have also relied a little too much on CGI, and the finale especially is lost amidst a literal swirling mass of CG imagery, failing to resonate on most levels. It is quite a pity, since what made the original great weren’t the visual effects but the collective comedic strength of a bunch of very talented comedians. While it would have been an extremely tall order to surpass the original, this 2016 iteration of Ghostbusters could certainly have done better than it did. While the relatively entertaining end credits sequence and coda seems to leave the door open for a sequel, one wonders if the film would do well enough to justify one.