Synopsis: In the shadowy world of drone warfare, combat unfolds like a video game – only with real lives at stake. After six tours of duty, Air Force pilot Tom Egan (Ethan Hawke) yearns to get back into the cockpit of a real plane, but he now fights the Taliban from an air-conditioned box in the Las Vegas desert. When he and his crew start taking orders directly from the CIA, and the stakes are raised, Egan’s nerves – and his relationship with his wife (January Jones) – begin to unravel. Revealing the psychological toll drone pilots endure as they are forced to witness the aftermath of their fight against insurgents, Andrew Niccol directs this riveting insider’s view of 21st-century warfare, in which operatives target enemies from half a world away.

Review: What happens when war can be conducted remotely, when obliterating human lives is reduced to an operator using a joystick thousands of miles away, and reviewing the carnage on a monitor? Does this reduce the emotional toll of war for the aggressor, and does it result in a more clinical, detached view of the casualties and collateral damage of waging a war? This is the grim scenario and tough questions that Good Kill puts forth, and is indeed one of the most relevant war movies that has been released in years. However, Andrew Niccol has directed and written the movie with a rather heavy hand, which actually lessens the impact that the movie has on audiences.

Ethan Hawke puts forth a solid, credible performance as Thomas Egan, and manages to convey a complex gamut of emotions without that many lines of dialogue. Unfortunately, the same cannot be said of his supporting cast – almost everyone is used either as a plot device or an expositional tool, and remains essentially dimensionless as characters.

Given the nature of the interactions in Good Kill, there is very little action to be had, but Niccol manages to ramp up the tension even given these confines. Although the action is viewed vicariously through a TV monitor and usually without any sound, it remains riveting and visceral, with such a high level of perceived realism that I found myself holding my breath each time the trigger is pulled. This is by far the most successful aspect of the film, and one that would likely stay with the viewer long after the credits roll.

Although it’s undeniable that Niccol has picked a very timely and relevant topic in Good Kill, his incessant soapboxing and moralizing comes across as a bit too much. It also doesn’t help that the various subplots (particularly the unnecessary romantic tension between Egan and new airman Suarez (Zoe Kravitz)).  Even the disembodied voice from Langley barking out executive commands via conference call falls prey to this, having to explain the administration’s rationale for issuing morally ambiguous kill orders at every turn. It’s a particularly clunky way of putting one’s point across, important as it may be. 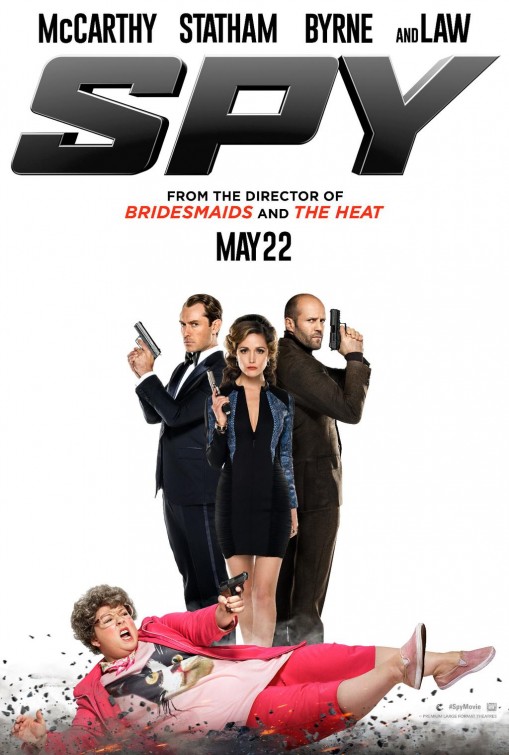 Synopsis: Susan Cooper (Melissa McCarthy), a shy deskbound CIA analyst, goes on a mission to help a field agent in trouble. Employing not-so-outrageous identities and not-so-fancy spy gadgets, she attempts to infiltrate the shadowy world of an alluring but dangerous weapons dealer. She leaves a trail of mayhem crisscrossing Europe, utilizing deception and false bravado to try and outwit her quarry and locate a stolen nuke.

Review: No one has managed to make Melissa McCarthy shine like Paul Feig has (and that includes McCarthy’s husband, who directed her in the mediocre Tammy), and in Spy they have left everything else (so far) in the McCarthy canon in the dust. Spy is undeniably the best Feig-Mccarthy pairing in the three films they have worked together on (the breakout hit Bridesmaids and the equally successful The Heat), and despite it being positioned firstly as a comedy, Spy is also a totally legit espionage action film, and I foresee it scoring great success at the box office despite a pretty packed Summer roster.

The most impressive thing about Spy is how it manages to meld the comedy and action genres together so well, without diminishing either aspect. This is in large part due to the how deftly Melissa McCarthy balances between the two – her comic timing is impeccable here, but she also manages to pull off the action and physical comedy sequences with equal aplomb (though there are some scenes where a body double was quite clearly used). Not many actors can lay claim to such an achievement, and it firmly establishes McCarthy as the reigning queen of comedy with a few tricks up her sleeve.

Paul Feig’s script does the same – it’s filled with excellent zingers and visual gags, so rich in material that one can easily watch the film a second time round and find even more to belly laugh at, and yet the spy story is equally engaging, with twists and turns that would surprise even the most jaded moviegoers. All the things that make a good spy movie are present here: exotic locations, over-the-top action sequences, a doomsday device and yes, even the classic Bond-style opening sequence makes an appearance.

Both McCarthy and the script are also bolstered greatly by a uniformly excellent supporting cast, almost all playing against type (and obviously having a great time doing it). The most notable are Rose Byrne, who is fantastic as the cruel but vapid villainess with a ridiculous accent and even more ridiculous coiffure, and Jason Statham, gleefully sending up his usual tough guy routine as a British spy who is all bark and no bite. Spy is possibly the most fun that will be had this Summer season, and is an easy recommendation to make to virtually any moviegoer.

Synopsis: After a disastrous wardrobe malfunction while performing for the President, the Barden Bellas, who are now three-time national champions, have fallen from grace and lost their mojo. Their only hope for redemption is to clinch the top spot at the World A Capella Championships, but they face their toughest battle yet against the formidable German team, Das Sound Machine.

Review: Don’t be fooled by the title – just like the original film, Pitch Perfect is actually a rather pitchy attempt. While Elizabeth Banks’ directorial debut is a perfectly credible one, the seams do show whenever the singing stops. Fortunately, there is a LOT of singing to be found in Pitch Perfect 2, and the astute choice of Banks and screenwriter Cannon to lavish more attention on characters like Rebel Wilson’s Fat Amy makes the proceedings much easier to bear despite the near two-hour running time.

One of the bigger changes from the first Pitch Perfect is that the sequel is much more female-empowered, with virtually every male cast member relegated to the sidelines. There are two romantic subplots (which arguably take up too much screen time despite their affable conclusions) but it’s really all about the girls – this is a movie that passes the Bechdel test with flying colours.

Kay Cannon’s script is filled with great one-liners, mostly given to Rebel Wilson, who is a blast to watch in her expanded role, and also Elizabeth Banks and John Michael Higgins, who return as colour commentators Gail and John, letting rip one sexual innuendo after another. However, Cannon can be accused of trying to include too much in the script – while there are a good number of other plot threads, including Beca’s (Anna Kendrick) internship at a record label, a lot of it feels like filler and doesn’t particularly engage on any level. Bellas newcomer Hailee Steinfeld boasts a lot of charisma, but honestly she isn’t given too much to do, though it can be assured that she will be given a meatier role in the (inevitable) next installment of the franchise.

Much like Glee, the strength of the Pitch Perfect franchise lies not in the drama, but in the musical numbers. In this aspect Banks has managed to do an excellent job. Not only are most of the songs great selections, but whenever she puts together a music set piece it is almost always note perfect. While the performances of Das Sound Machine are all great, nothing beats the finale performance by the Bellas, featuring the song Flashlight (which, among others, includes Sam Smith and Sia as co-writers) and virtually guaranteed to leave one with goosebumps, forgiving almost all the flaws that have come before it.

Synopsis: An uptight and by-the-book cop (Reese Witherspoon) tries to protect the sexy and outgoing widow of a drug boss (Sofia Vergara) as they race through Texas pursued by crooked cops and murderous gunmen.

Review: I really wanted to like Hot Pursuit. After all, action comedies with female leads are few and far between, and Reese Witherspoon and Sofia Vergara are both likable actors. This also happens to be Vergara’s first proper lead role in a movie, which is kind of surprising given the success she has found off hit TV sitcom Modern Family. Although there are laughs to be had, Hot Pursuit is more lukewarm than hot, the result of minimal chemistry between the leads and a script that simply doesn’t do enough. Hot Pursuit runs a short 87 minutes but still feels laboured before the final reel, and even the gags feel like they have run their course an hour into the film.

It appears from the end-credit outtakes that Witherspoon and Vergara not only had a great time making the film, but that they seem to have developed what seems like a rather healthy camaraderie as well. Unfortunately, I doubt that viewers could tell that from the main feature itself – there are barely any sparks between the two despite sharing significant screen time. It also annoys me that – without going into too much detail for risk of spoilers – the screenplay tries its best to create a will-they-stay-or-will-they-go tension between the odd couple, creating scenarios that then limply resolve themselves in a matter of minutes without making any actual impact to the pairing.

It also seems like half the jokes seem to be about either Witherspoon’s height and boyish (??) looks or Vergara’s age and Latina heritage, and neither actress makes even a concerted effort to rise above the mediocre and rather lazy writing. They are content to play to their characters’ stereotypes, and this is really the essence of why Hot Pursuit doesn’t work that well despite low expectations: nothing comes across as being particularly genuine and as a result it just doesn’t engage enough. When the same joke gets recycled for the fifth time in an hour, even the funniest gag starts to feel like a lame duck.

The audience is never truly vested in what happens to either woman, and since this is a comedy everyone already knows what the eventual outcome would be. The journey is indeed more important than the destination, and in this case the journey just isn’t all that interesting. As a low budget contender for Summer, Hot Pursuit will definitely get its fair share of moviegoers, but given that both Witherspoon and Vergara have producer credits on this film, I really expected it to deliver more than it did.