Screenplay: Eric Roth and Bradley Cooper & Will Fetters, based on a story by William A. Wellman and Robert Carson

In this new take on the tragic love story, he plays seasoned musician Jackson Maine, who discovers – and falls in love with – struggling artist Ally (Lady Gaga). She has just about given up on her dream to make it big as a singer, until Jack coaxes her into the spotlight. But even as Ally’s career takes off, the personal side of their relationship is breaking down, as Jack fights an ongoing battle with his own internal demons.

Review: It’s easy to see why the word “Oscar” is being bandied around in almost every review of A Star is Born. While this is the story’s third cinematic iteration, it is easily the best, far outclassing Barbra Streisand and Kris Kristofferson’s take 42 (!) years ago. Retaining the music industry setting of the ’76 film but updating the content to reflect a much more current sensibility, A Star is Born is surprising in first-time director Bradley Cooper’s assured helming. Coupled with excellent chemistry between Cooper and Gaga and equally impressive performances from both, a relatable storyline, and some truly well-produced musical numbers, the film has transformed what seemed like a low-key romantic melodrama with a few familiar faces into a full-blown frontrunner for awards season.

Much of the charm of the film lies in the leads. Bradley Cooper disappears into the role, and while he plays the part of an alcoholic, the performance is restrained and authentic, with minimal theatrics and thus allows the audience to identify with his character easily. Lady Gaga also impresses in her acting debut, giving a heartfelt and believable performance (particularly pre-fame Ally), faring much better than many pop stars that attempt to cross over to the acting world. What’s more important is that the narrative requires the leads to have an almost instant chemistry and connection, and Cooper and Gaga have chemistry in spades.

This being Bradley Cooper’s directorial debut, what he had achieved here is impressive. Not only does he deftly handle the varied elements in the film – big and small musical set-pieces, low key romantic sequences and melodramatic scenes – but not once does he lose control of the narrative, and the end result is a film that’s wistfully melodramatic without ever being over the top. It has also been many years since I’ve seen a film that deals with alcoholism so matter-of-factly, never shying away from the seedier, unsavory aspects that the addiction brings, almost reminiscent of the seminal Leaving Las Vegas.

Music will also make or break a film like this one, and again in this aspect A Star Is Born scores very highly. It’s a given that Lady Gaga would excel in her performances, but surprisingly Cooper can also hold a tune and totally looks the part of a rock star on the decline. There are some very catchy songs included in the soundtrack, which ranges from country-rock to pop, and should see extended airplay.

In some ways, A Star is Born is a movie that feels like a throwback to the older, grander days of cinema, where it doesn’t take much more than a heartfelt story and committed performances from the actors to deliver a film that actually makes one feel something. Little wonder that it has resonated well with audiences, and potentially will stand the test of time (at least, far better than Barbra’s version). 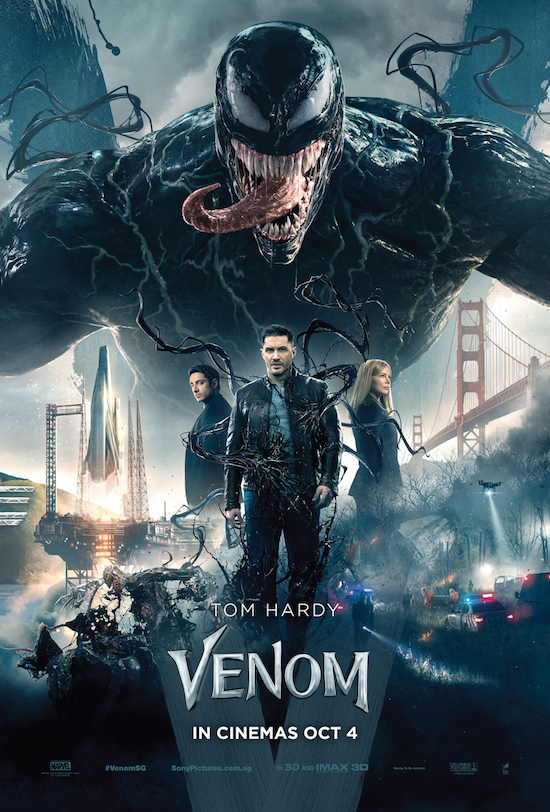 Synopsis: Investigative journalist Eddie Brock (Tom Hardy) attempts a comeback following a scandal, but accidentally becomes the host of an alien symbiote that gives him a violent super alter-ego: Venom. Soon, he must rely on his newfound powers to protect the world from a shadowy organisation looking for a symbiote of their own.

Review: The only question on my mind when the credits started rolling on Venom was “what happened?” Where was the dark, gritty movie that the trailers advertised? Why does it feel like director Ruben Fleischer made two totally different movies, but couldn’t decide which version of Venom to go with? Honestly, Venom in its current form is a mess, and its only saving grace is a somewhat decent performance by Tom Hardy, as well as some genuine laughs that could be had – as long as you go into the cinema cognizant that this film is a weird love-child between Deadpool and Spider-Man.

A large part of the problem with Venom is its screenplay – the group effort from Jeff Pinkner, Scott Rosenberg and Kelly Marcel is unfocused and takes too much time to get to the point, with an overlong first act that sets up the story but presents Eddie Brock as a bumbling buffoon more than a sharp, street-smart reporter he’s supposed to be. It’s only when Venom starts manifesting himself that the proceedings get more interesting, but then the film pivots too far in the other direction, presenting the combination of Eddie and Venom more like bros than antiheroes, ineffective buddy cops rather than a powerful alien symbiote and its unwilling human host. It’s entertaining, without a doubt, but having seen Tom Hardy in far more impressive performances, this does feel like a step down.

The other actors fare even worse than Hardy – Michelle Williams struggles to do something meaningful with her bland, rote love interest character, and the usually interesting Riz Ahmed is unable to break out of the clichéd confines of his megalomaniac role. Both actors are literally there as plot devices, and not even very essential ones at that.

It doesn’t help that Fleischer has made some pretty questionable directorial choices as well – he somehow decided that the best way to showcase the (anti)climactic final showdown between two near-black characters is at night with minimal lighting, and similarly the action sequences throughout the movie are not particularly well-choreographed nor visually interesting. The effects also come across as rather sub-par (especially when we are all so used to the top-tier effects in both Marvel and DC superhero movies), and it’s even more apparent in IMAX 3D (save your money and go for 2D).

In a recent interview, Tom Hardy groused that all his favourite parts of Venom was cut out of the movie, and there is a strong sense that what he said is true. Venom is a wasted opportunity to take the Sony part of the Marvel Cinematic Universe into a different direction. While obviously Sony will have a vested interest to milk more titles out of the Venom sub-universe (and clearly indicated in the film’s mid-credits), the way this first film ended up will likely put the franchise’s future in jeopardy.