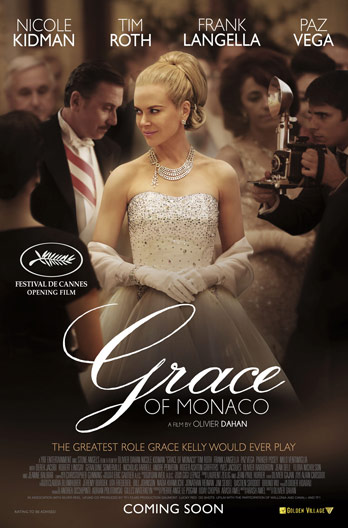 Review: If Nicole Kidman was looking to end her poor run at the box office, Grace of Monaco is not going to be the one to do it. Critically ravaged at Cannes, the film – though not as bad as what early reviewers have indicated – is still a terrible misstep in more ways than one. Perhaps the title card that opens the movie already says it all – instead of the typical “based on a true story”, it is instead “a fictional account inspired by real events”, which suggests that much of what transpires on screen belongs strictly in the imagination of Dahan and probably Arash Amel. (I’m quite sure that Grace Kelly’s role in the blockade was far smaller than what was intimated here) I will not be alone in feeling that the film does not do justice to Grace Kelly or any of the other real life characters.

Although Nicole Kidman had obviously put a lot of effort into the role, her portrayal of Grace Kelly remains unconvincing, though one must give kudos to Kidman putting up with the ridiculous extreme close ups that Dahan subjects her to. While it’s understandable that close ups allow the audience to observe the smaller nuances in expression, when the actress’s face is pressed right up to the lens, allowing one unfettered access to even her nostril hairs, I would believe that backing the camera up is the wiser thing to do. There’s absolutely no chance that this performance would generate any Oscar buzz, although it had seemed promising before the film was released.

There’s also a sense that no one really knew what direction to take this movie, which echoes the equally misguided Diana from last year, starring Nicole Kidman’s good friend Naomi Watts. The film is alarmingly superficial in its treatment, and the audience neither gets an in-depth look at Grace Kelly nor at the 1962 blockade, which means it essentially is a daytime soap opera with a bigger budget. That parts of it isn’t even real just makes things worse – were the real life developments not interesting enough that it required pointless re-imagination?

There are nice things to look at in the film, as it boasts exotic locales, attention to period detail, and a lavish set design. Fans of Nicole Kidman will surely be placated by the numerous costume changes she goes through, as well as the beautiful jewelry she dons throughout. However, it’s extremely difficult to muster up a genuine recommendation for the film based simply on these positives, and one cannot help but feel that Grace Kelly and Nicole Kidman both deserved something better than this.