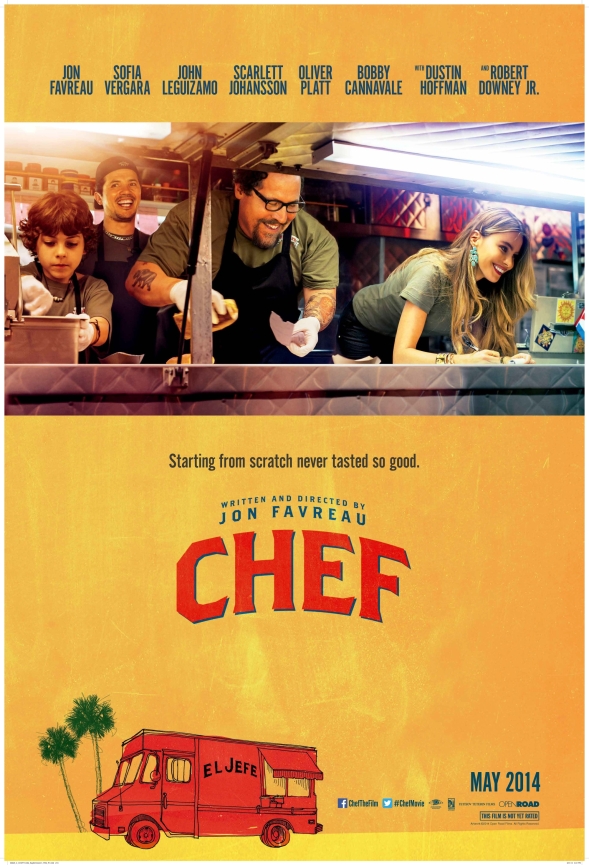 Synopsis: A chef who loses his restaurant job starts up a food truck in an effort to reclaim his creative promise, while piecing back together his estranged family.

The premise of the film is a simple one, and the denouement is a given, but Favreau is happy to take his time getting there – like a true road trip, the enjoyment of this movie lies in the journey and not the destination. Favreau himself is excellent in the lead role of Chef Casper, but it’s the great chemistry that he shares with two other cast members – John Leguizamo’s Martin and the young Emjay Anthony as his son Percy, that truly makes the film special. There’s an easy, seemingly genuine camaraderie between the trio, and this makes their road trip across America a very enjoyable one.

Not only does Chef feature a fair amount of hunger-inducing food and cooking sequences (the grilled cheese sandwich scene is destined to become the de facto instructional video for making grilled cheese sandwiches), but there are also great scenes that showcase the sights and sounds of the various cities that the food truck passes by, augmented by an eclectic and energetic soundtrack. There’s interestingly a whole occasionally amusing subplot devoted to the usage of social media, but it unfortunately come across more like a paid advertisement for Twitter because it feels a little too staged.

Sure, there are elements that don’t work too well – the family drama in particular pretty much fails to take off.  It requires viewers to be vested in characters that just aren’t all too fleshed out (Sofia Vergara in particular seems to have simply transplanted her role in Modern Family), and Favreau goes off the deep end a fair bit with the schmaltz. And whilst it’s clear that Favreau has great access to big-name stars, the cramming of a good number of celebrity cameos doesn’t really do much for the film either. While Chef may not work as a degustation menu, it certainly satisfies as an amuse-bouche, and while it’s clearly a vanity project for Favreau (perhaps more accurately termed an anti-vanity project in this case), it does far better than the usual crop of films in this niche genre.