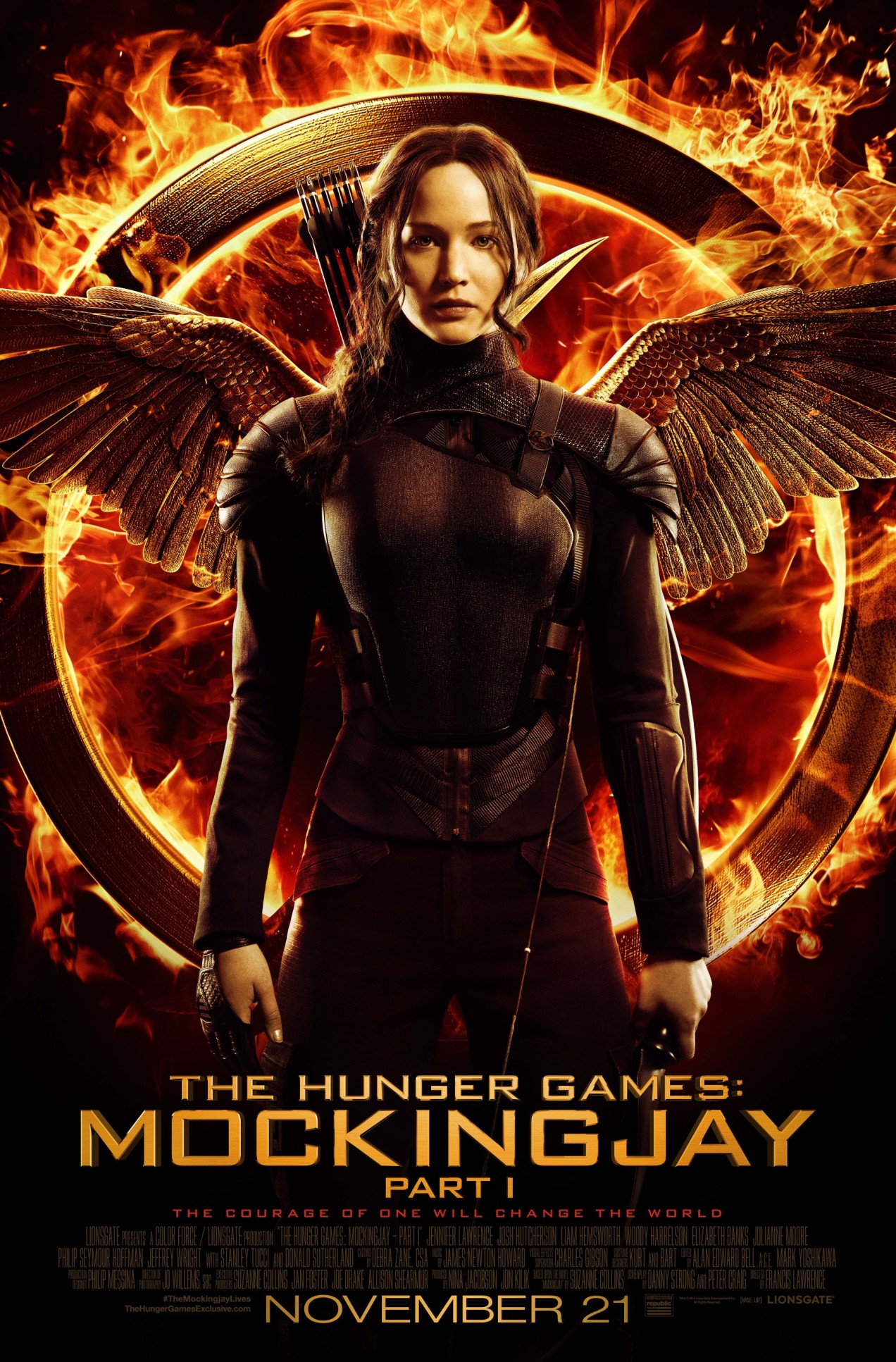 Writers: Peter Craig and Danny Strong, based on the novel by Suzanne Collins

Synopsis: The Hunger Games: Mockingjay – Part 1 opens with Katniss Everdeen (Jennifer Lawrence) in District 13 after she literally shatters the Hunger Games forever. Under the leadership of President Coin (Julianne Moore) and the advice of her trusted friends, Katniss spreads her wings as she fights to save Peeta (Josh Hutcherson) and a nation moved by her courage.

Review: Despite its best intentions, Mockingjay Part 1 is easily the weakest installment in the Hunger Games franchise thus far. Lionsgate had made the financially-lucrative (but creatively bankrupt) decision to cleave the final installment in two, but unfortunately Mockingjay Part 1 does not work well as a standalone movie, and ends in such an abrupt manner that it can potentially turn casual audiences off from making a return visit for Mockingjay Part 2. The final novel in the Hunger Games trilogy was the grandest in scale, but does not lend itself well to a (probable) 4-plus hour transition to the big screen. Mockingjay Part 1 is ponderously paced, meanders and feels drawn out, and is only sporadically interesting in its two hour plus running time. While the elements that made the first two movies good are still present, they are weighed down by too much unnecessary baggage.

Although “The Hunger Games” is still part of the title of Mockingjay, it is important to note that while there’s war and strife, there’s no Hunger Games being conducted in the movie. While this is not surprising for anyone who has read the novels (like myself), expectations of some audience members will surely be confounded. Mockingjay is a far more static movie, with a very minimal number of action setpieces. Much of it is set underground, in District 13, and with Katniss essentially neutered from most of the action (of any kind), it’s almost like the franchise is banking on the halo effect of her past two cinematic outings to coast by. Even though Jennifer Lawrence is a great actress, she’s really only effective in a handful of scenes in Mockingjay Part 1, a stark difference from the previous two films where she held the audience’s attention from beginning to end. The film does boast a very strong supporting cast of veteran actors, especially the late Philip Seymour Hoffman, but none of them are really given enough time to shine, despite the film’s length.

It doesn’t help that Peeta is separated from Katniss for essentially the whole movie – while Liam Hemsworth’s Gale is around Katniss, the love triangle is essentially DOA since there’s no chemistry whatsoever between Hemsworth and Lawrence, which has already been confirmed in the last two movies, but brought into starker contrast this time round. Fortunately, the romance is a smaller and less consequential component of the film compared to other YA offerings, so it doesn’t completely undermine the movie despite the clunkiness.

Since it’s essentially half a movie, it is difficult to judge if Mockingjay is a befitting swansong for the franchise until Part 2 is released (a full year later, in November 2015). It cannot be denied, however, that nothing much really happens in Mockingjay Part 1, since it’s merely a placeholder for the true conclusion of the film in Part 2, where surely there’s less inaction and an actual denouement. This is the film’s most glaring fault and drowns out almost every positive aspect. While it’s still a perfectly serviceable YA film (albeit a fair bit darker and brooding than most films in the same genre), Catching Fire had set up higher expectations which unfortunately are not met with this half of the finale.