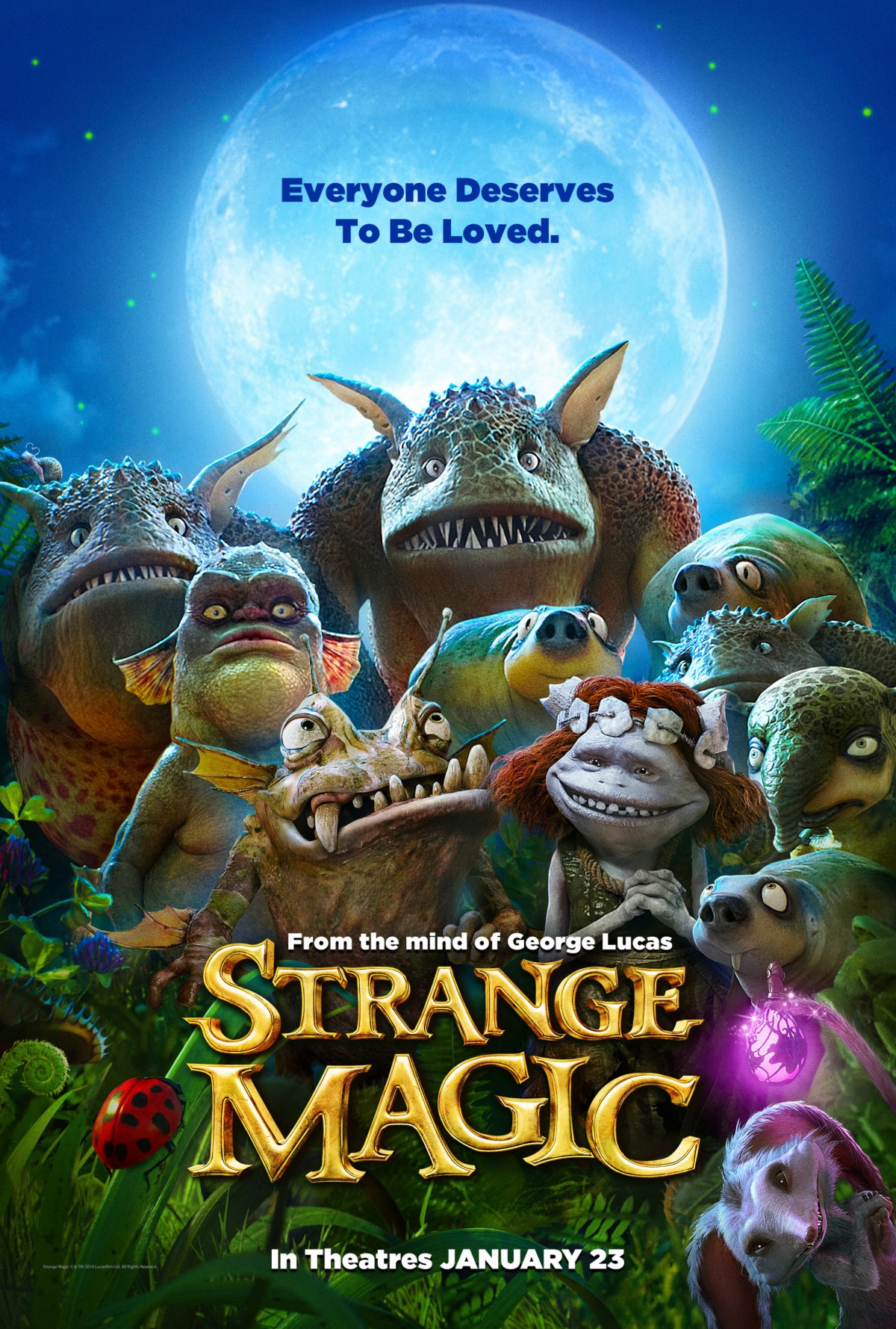 Synopsis: Strange Magic is a madcap fairy tale musical inspired by “A Midsummer Night’s Dream.” Popular songs from the past six decades help tell the tale of a colorful cast of goblins, elves, fairies and imps, and their hilarious misadventures sparked by the battle over a powerful potion.

Review: At first, it may seem like a strange decision to release Strange Magic in January, since it is not a window that usually favours animations. The realization, however, starts about 15 minutes into the film – it must have been a contractual agreement for Disney to release Strange Magic as part of its purchase of Lucasfilm, because it’s such a far cry from any Disney-related animation that I can’t imagine Disney voluntarily releasing this film as-is (another tell-tale sign: Strange Magic is released through Disney’s Touchstone Pictures). Hence, a January “dumping ground” release. Strange Magic is a bizarre train wreck of an animation, and despite its okay visuals and an eclectic soundtrack, just isn’t very entertaining to both young and old.

Apparently based on Shakespeare’s A Midsummmer’s Night Dream, the story was thought up by George Lucas, and plays out to a soundtrack of some of his favourite songs (spanning six decades). Therein lies the first of many conundrums – if it’s a film targeted at pre-teen girls, then why the karaoke renditions of songs that could be four or five times their age? (As a side note, some of these song rights surely weren’t cheap to obtain). The Glee-style mashups are also poorly executed, resulting in discordant musical numbers that simply don’t work.

And then there’s the story, which once again proves that George Lucas really can’t write love stories. It’s an awkward take on A Midsummer’s Night Dream, exacerbated by the fact that there’s absolutely no compelling reason for any of the leads to fall in love with each other. The conflicts are uninteresting and their resolutions aren’t much better. It’s really quite an achievement to have such oft-used tropes fail so spectacularly in execution.

Although the voice cast features a number of recognizable names, no one really seems to put in much of an effort – Alan Cumming and Evan Rachel Wood are sonically mismatched and both struggle in performing the songs, and while the supporting cast fare a bit better, even Broadway stalwarts like Kristin Chenoweth fail to impress. It does not help that while well animated (notably done in Lucasfilm Singapore), the character designs all look slightly creepy (I’m not even referring to the Bog King, whose design is actually one of the better ones in the film). It’s little surprise that Strange Magic was decimated in its US release, and I honestly do not expect the Singapore release to fare much better.