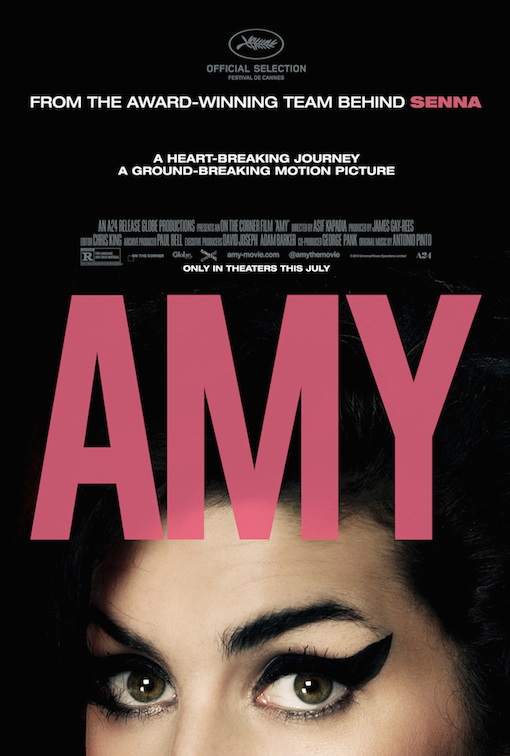 Synopsis: Amy tells the incredible story of six-time Grammy-winner Amy Winehouse – in her own words. Featuring extensive unseen archive footage and previously unheard tracks, this strikingly modern, moving and vital film shines a light on the world we live in, in a way that very few can.

Review: Just like Asif Kapadia’s previous documentary Senna, you don’t need to be a fan of Amy Winehouse to appreciate the documentary Amy. It is a quietly devastating meditation on her stratospheric rise to fame and how she rapidly came undone, succumbing at the age of 27 to the cumulative effect of drugs, alcohol and bulimia. It’s not a story that’s unique to Amy (other “27 Club” members include Janis Joplin, Jimi Hendrix, Kurt Cobain, and Jim Morrison), but the fact that she belongs to a generation that has diligently self-documented their lives, and in an era where celebrities’ lives are under constant scrutiny, gives rise to a richness of material that Asif uses to great effect.

Asif continues to employ the technique that he used in Senna, where instead of talking head interviews and re-enactments, most of the interviews that he conducts are audio-only, and serve as voiceovers to a wealth of images and videos (many taken by Amy Winehouse or those close to her), performance footage and news footage. It is often raw, pixelated video that is queasily jerky (think Blair Witch Project or Cloverfield shakycam – those who are prone to motion sickness may be better advised to watch this on the small screen), but because the material is so personal, gives a deep, nuanced glimpse into the most intimate moments of Amy Winehouse’s short life.

It’s also interesting to see how much access Asif managed to obtain for this documentary – not only was he able to get notes and videos created by Amy Winehouse herself (and for fans, some previously unseen performance footage as well), he was also able to interview almost all the key people in Amy’s life, including her childhood friends Juliette Ashby and Lauren Gilbert, her first manager and friend Nick Shymansky, and more importantly, her ex-husband Blake Fielder-Civil and her father Mitch Winehouse. Although Asif generally presents the material (expertly edited by without comment, it’s clear to see that Blake and Mitch were the two most destructive influences in Amy’s life. Mitch has particularly been vocal about how the documentary had twisted his relationship with Amy, but the dispassionate way the material is presented makes it hard to reach any other conclusion.

The last one-third of Amy is especially difficult to watch, as the audience literally witnesses Amy waste away, as well as get a glimpse of what a media and paparazzi feeding frenzy resembles. Yet it’s also tempered with one of the most poignant scenes in the film, of a star-struck Amy recording a duet with one of her idols, Tony Bennett, just a few months prior to her death. Despite a shaky start, she eventually manages to record an excellent rendition of “Body and Soul” that reminds the audience yet once again that she was an incandescent talent whose light burned out way too early. Particularly memorable is a line from Bennett himself that “life will teach you how to live it, if you live long enough”. Unfortunately, Amy Winehouse had no such luxury.