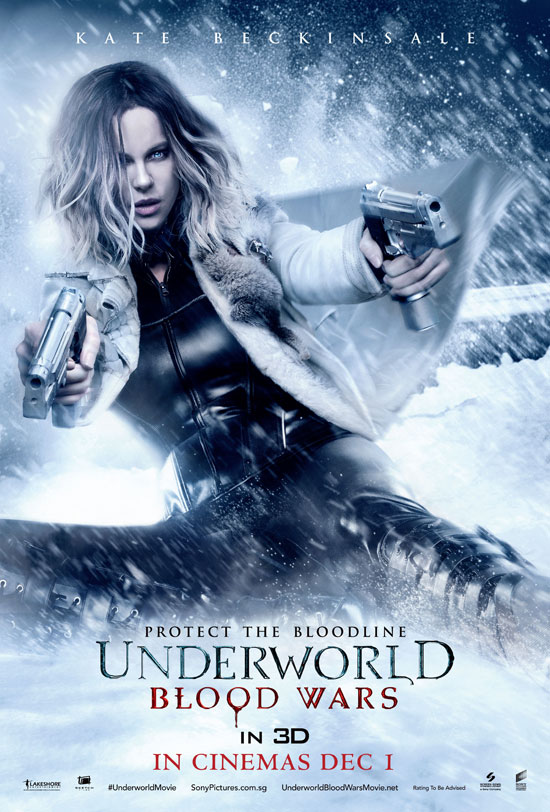 Synopsis: The next installment in the Underworld franchise follows vampire death dealer, Selene (Kate Beckinsale) as she fends off brutal attacks from both the lycan clan and the vampire faction that betrayed her. With her only allies, David (Theo James) and his father Thomas (Charles Dance), she must stop the eternal war between lycans and vampires, even if it means she has to make the ultimate sacrifice.

Review: The seemingly ageless Kate Beckinsale reprises her role as vampire assassin Selene for a fifth time in Underworld: Blood Wars, and while she looks none the worse for wear, the same cannot be said of the Underworld franchise. Most audiences would have ceased to care about what happens between the vampires and the lycans, and Blood Wars would not make anyone sit up and take notice either.

Although the film is clearly targeted at existing fans of the franchise, new director to the series Anna Foerster (also the series’ first female director) puts in a fair number of flashback sequences to help the uninitiated along. However, these flashbacks actually drag the film out much more than they should, and the film sags under the weight of unnecessary exposition – after all, everyone is here for Selene and the action sequences, and the plot is really more of an afterthought. Even so, some of the writing in Blood Wars is laughably bad, especially anything that involves the hokey albino vampire coven that looks literally ripped out of Game of Thrones.

Unfortunately, even the action sequences do not do the franchise much justice. It’s very clear that Blood Wars was made with a smaller (much smaller) budget, but even basic wirework looks and feels clumsily executed. CGI looks clunky and unpolished as well, often so poorly executed that the film would have done better with less.

That the film ends abruptly without any real resolution and clearly signals a sixth film (which Beckinsale has already signed up for) is just adding salt to the wound. The mystery around Selene’s (now missing) daughter remains almost entirely unresolved, and Selene’s only character development is unbelievably limited to frosted hair tips and a new fur coat. Even for fans, Blood Wars is a tough sell.