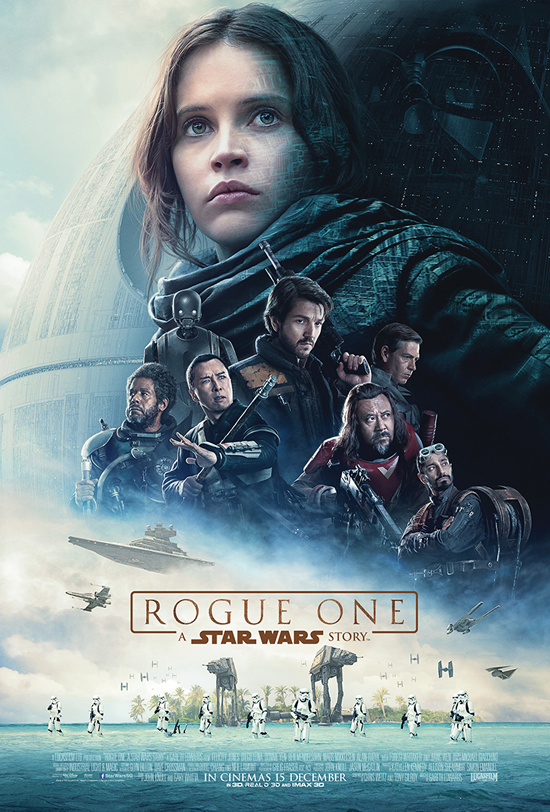 Synopsis: From Lucasfilm comes the first of the Star Wars standalone films, “Rogue One: A Star Wars Story,” an all-new epic adventure. In a time of conflict, a group of unlikely heroes band together on a mission to steal the plans to the Death Star, the Empire’s ultimate weapon of destruction. This key event in the Star Wars timeline brings together ordinary people who choose to do extraordinary things, and in doing so, become part of something greater than themselves.

Review: As the first “non-Episodic” movie in the Star Wars cinematic universe, Rogue One is a triumph – although it caters mostly to the (rabid) Star Wars fanbase, there is enough on display here that would please anyone who is a fan of space operas (and to an extent, war movies). Harkening back to the original trilogy, and yet a couple of shades darker, Rogue One can stand shoulder-to-shoulder with any of the canonic Episodes on almost every level. This is great news especially for fans, since it means that the Star Wars cinematic universe is set to expand far beyond what George Lucas had achieved with his six films.

Rogue One is far from being a perfect movie – it starts off slowly, and the amount of exposition in the first hour threatens to bog the film down multiple times. Thankfully, once the heavy exposition gets out of the way, and the audience is reintroduced to the menace of Darth Vader, Rogue One does kick into high gear and delivers the payload. No spoilers here, but suffice to say the most iconic Darth Vader sequence in Star Wars now resides in Rogue One (yes, even more so than “I am your father”, though that scene is far more ingrained in pop culture).

Rogue One once again has a strong female protagonist in Jyn Ersa, and Felicity Jones puts in an excellent performance, being able to emote and kick ass with aplomb. However, Diego Luna doesn’t manage to match Jones’ performance, and there’s a distinct lack of chemistry between the two – just as well that the film does not really try to force a romance. Donnie Yen does good work as the blind warrior Chirrut Imwe, though it does seem at times that he’s merely reprising his most iconic role of Ip Man in a different setting. His presence, together with Jiang Wen as Baze Malbus, will almost certainly ensure very healthy box office takings in China.

Mirroring The Force Awakens, however, the most memorable character in Rogue One is a non-human – K-2SO, voiced flawlessly by Alan Tudyk. K-2 not only has some of the best lines in the show, but is one of the few sources of levity in a film that is almost relentlessly grim, though not annoyingly so like C-3PO.

Special effects are employed sparingly in the action sequences, resulting in an organic, old-school feel to many of the scenes (the aerial dogfights in particular), but the CGI is top-notch when used. Much of the ground assault sequences feel equally at home in a war movie, and the stakes of the fight between the rebels and the Imperial Army have never been as personal and high as presented in Rogue One.

An interesting point of note is that the most impressive special effect isn’t in the “big” scenes, but the digital sleight of hand that was employed to bring Peter Cushing back to “life” as Grand Moff Tarkin, despite him being dead for 22 years. One can only imagine the amount of work that was required to recreate Cushing’s likeness (using a stand-in actor, a voice actor and CG) in such a convincing manner.

It’s not hyperbole to say that Rogue One is one of the most anticipated movies of 2016. Fortunately, it has managed to deliver, and has even stirred a desire in me to rewatch the original trilogy once again. While it bears the moniker of a “Star Wars Story”, Rogue One should more accurately be called Episode 3.5, because it dovetails so perfectly into the opening of A New Hope. Ranked amongst the two films since J. J. Abrams’ reboot last year, Rogue One actually ends up a notch above The Force Awakens, especially in terms of rewatchability.