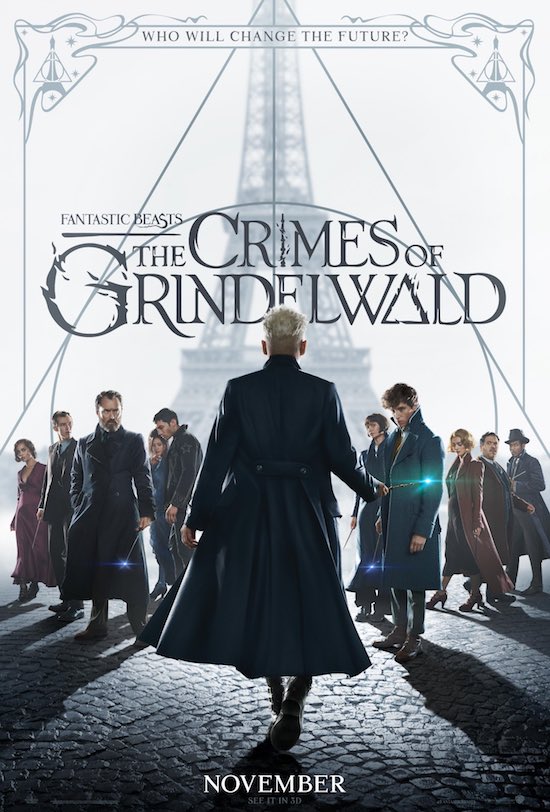 Synopsis: At the end of the first film, the powerful Dark wizard Gellert Grindelwald (Johnny Depp) was captured by MACUSA (Magical Congress of the United States of America), with the help of Newt Scamander (Eddie Redmayne). But, making good on his threat, Grindelwald escaped custody and has set about gathering followers, most unsuspecting of his true agenda: to raise pure-blood wizards up to rule over all non-magical beings. In an effort to thwart Grindelwald’s plans, Albus Dumbledore (Jude Law) enlists his former student Newt Scamander, who agrees to help, unaware of the dangers that lie ahead. Lines are drawn as love and loyalty are tested, even among the truest friends and family, in an increasingly divided wizarding world.

Review: So here we are, waist deep in the new (sub?)franchise of Fantastic Beasts, with two movies done and (purportedly) three more to go, and there’s this unshakeable sense that the franchise is somewhat in the woods. While excuses can be given for the slightly faltering first film in 2016 – since it requires not just an understanding of the Harry Potter universe, but also require new world-building from Rowling herself – this second movie should have been the one where the franchise finally hits its stride, and we find ourselves whisked away on an amazing journey back in the Wizarding World. Unfortunately, that’s not really the case – and no, I’m not referring to what Newt Scamander is housing his menagerie of beasts in.

There’s no denying that J.K. Rowling is a master storyteller, and her Harry Potter novels and movies have enthralled millions for a reason. However, with Fantastic Beasts, and in particular The Crimes of Grindelwald, she seems to have fallen into the same trap as George Lucas, stuffing the movies full of Wizarding World minutia that honestly even the hardcore fans would find trouble following, and crushing the film under the sheer weight of subplot after subplot after subplot. The most frustrating element of The Crimes of Grindlewald is that it cannot stand alone as a feature movie, and only works when seen as being a chapter in an as-yet incomplete movie consisting of five parts.

Despite running a rather long 133 minutes, much of The Crimes of Grindelwald is simply moving chess pieces around, setting up a bigger story that fails to percolate or conclude meaningfully in this installment, leaving the film feeling even emptier and more incomplete than its predecessor. The storylines are also not easy to follow, and in one instance, Rowling actually leads audiences down one narrative and then literally gets another character to say “but wait, something else actually happened!” It’s largely unnecessary and coupled with the labyrinthine construction of links back to the larger Harry Potter universe, makes the viewing experience of The Crimes of Grindelwald in turns confusing and taxing. And since Rowling is the sole screenwriter credited for the screenplay, the blame really falls squarely on her shoulders.

It also doesn’t help that the central characters in this universe are actually less engaging than the “minor” players – the trio of Redmayne’s Newt Scamander, Depp’s Gellert Grindelwald and Ezra Miller’s Creedence Barebone are uninteresting and flat in terms of performance, and in this installment even the fantastic beasts come off as being rather one-dimensional. What does help is that some of the new additions to the cast fare better, notably Zoe Kravitz’s spirited performance as Leta Lestrange, as well as Jude Law’s youthful take on Albus Dumbeldore (and carrying off a waistcoat far better than most people could). Returning favourites Queenie (Alison Sudol) and Jacob (Dan Fogler) continue to be delightful characters to watch, but unfortunately get very little screen time this installment.

Visually, however, The Crimes of Grindelwald is definitely one of the better looking films of the year. It is clear that a lot of thought has been put into making the 3D viewing experience a positive one, with 3D effects at times even seemingly extending beyond film’s borders (this isn’t something I’ve ever observed prior to this film). There are also plenty of visual effects that pack a punch, even though it really is par for the course these days. However, visual pizzazz can only do so much, and while The Crimes of Grindelwald is a guaranteed box office success, one wonders how much longer the Harry Potter goodwill will last if the films continue to be so lackluster.