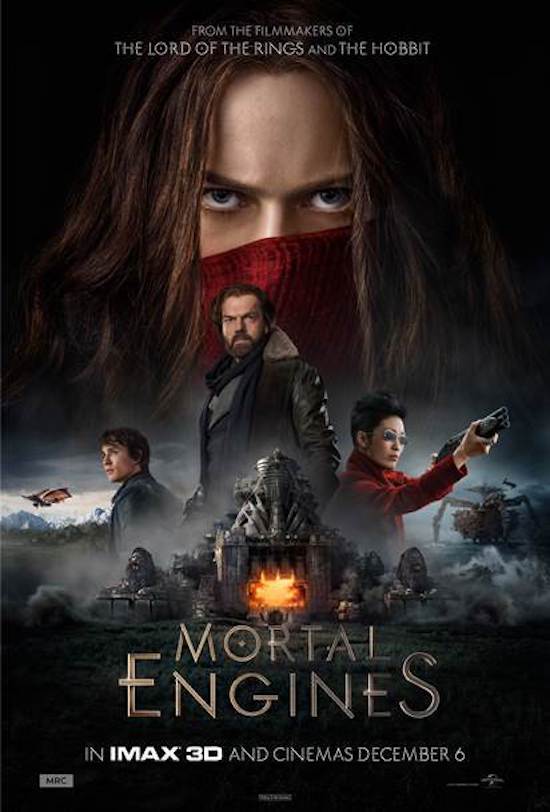 Synopsis:Hundreds of years after civilization was destroyed by a cataclysmic event, a mysterious young woman, Hester Shaw (Hera Hilmar), emerges as the only one who can stop London — now a giant, predator city on wheels — from devouring everything in its path. Feral, and fiercely driven by the memory of her mother, Hester joins forces with Tom Natsworthy (Robert Sheehan), an outcast from London, along with Anna Fang (Jihae), a dangerous outlaw with a bounty on her head.

Review: Having not read the source novels, I can only wonder why the Mortal Engines quadrilogy by Philip Reeve appealed so much to Peter Jackson as to justify spending triple-digit millions on the production of this first movie. Judging from the result, it’s really hard to imagine the film engaging the general masses, and seems highly unlikely that this spawning off an actual quadrilogy of films. Although Mortal Engines is a serviceable action film, it is almost entirely (and transparently) derivative, and despite having Peter Jackson in the mix, not very imaginative either. The fact that for many, the only truly recognizable face is that of Hugo Weaving will also mean it will be a challenge to get seats filled in theatres, especially in a crowded year-end release slate like this year.

Although Mortal Engines kicks things off with a relatively interesting “car chase” featuring two Traction Cities, it doesn’t ever pick up from there, even if the film remains consistently good to look at (WETA did an amazing job with the visual effects). It also cops elements from past films, from Howl’s Moving Castle to Terminator to Mad Max and especially Star Wars (pro tip: don’t play a Star Wars reference drinking game unless you’re ready to get stone-cold drunk) in the final reels. The unfortunate thing about Mortal Engines is that so much of it feels like such a slog – the interminable middle with the side story on Shrike and the entire sojourn to some city in the air comes across as being particularly extraneous and unnecessary.

Special dishonorable mention must go to Junkie XL’s score for the film, which could possibly be the most overblown and in-your-face scoring I’ve had to sit through the entire 2018. Just when you thought it couldn’t get any more ridiculously overbearing, the choir joins the fray and punches you in the aural gut. It’s hugely distracting and never hits the right emotional beats, even in the quieter moments.

While the acting is all passable, no one actually impresses and therein is the final nail in Mortal Engines’ coffin. There’s really nothing to get excited about – no standout performances from the both the familiar and unfamiliar faces in the cast at all – it’s either just adequate or barely passable. While it’s never easy to act against a green screen, the actors here simply don’t make a dent at all. And this is reflective of the entire movie – it could have potentially made more bank if not released this month, but when there are so many higher-profile or simply better movies to choose from, it simply isn’t compelling enough to recommend the film to anyone, save perhaps for fans of the source novels.