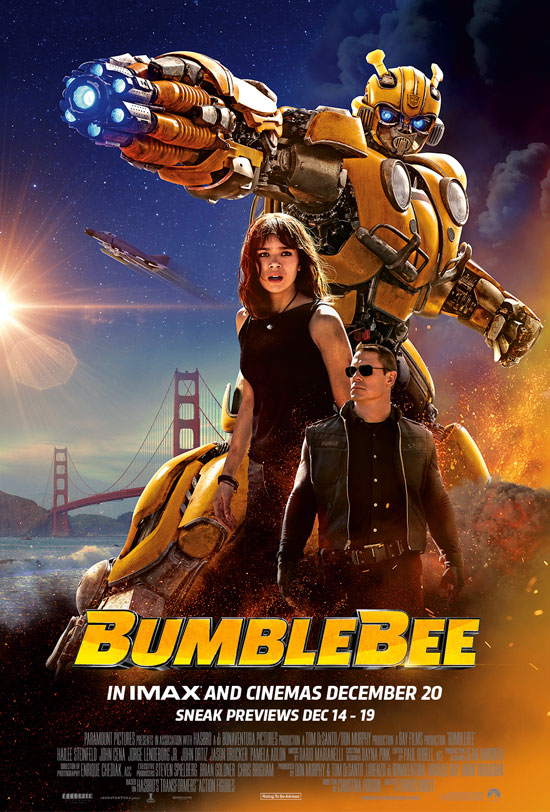 Synopsis: On the run in the year 1987, Bumblebee finds refuge in a junkyard in a small Californian beach town. Charlie (Hailee Steinfeld), on the cusp of turning 18 and trying to find her place in the world, discovers Bumblebee, battle-scarred and broken. When Charlie revives him, she quickly learns this is no ordinary, yellow VW bug.

Review: To be dreadfully honest, I had longgiven up on the Transformers franchise, with each succeeding movie getting more bloated and more unwatchable. When Bumblebee was announced, I had expected more of the same, except what the film turned out to be was a total surprise – not only is it a solidly entertaining action film, it is a very decent coming of age movie as well, actually managing to tug at my heartstrings every now and then. Though it took more than a decade, the Transformers franchise has finally birthed a genuinely good movie, and I believe something more along the lines of what Transformers (cartoon) fans had wanted all along.

Much of Bumblebee’s success probably lies in the fact that Michael Bay had finally vacated the director’s chair for this pseudo prequel, and on top of that picking Travis Knight (of the excellent Kubo and the Two Strings) was a great choice. Perhaps due to his background in animation, and also not being as enamoured with big, meaningless explosions like Bay was, Knight slows down the pace and makes a film a quieter, more sedate affair, never allowing the robots, CG or mindless action take over the movie. Yes, there are still a number of big explosions and action sequences, but this is a film with heart first and foremost, rather than the other way round.

In fact, Bumblebee plays out pretty much like a traditional boy-and-the-dog movie, except that the lead character is a girl and the dog is a little more advanced and badass than the usual puppy. The emotional beats are on point, and the 1987 setting also recalls the kindler, gentler movies of that era. The film boasts an excellent soundtrack and also has great attention to period detail, and anyone who’s lived through the 80s would definitely experience a fair bit of nostalgia as the film progresses.

Bumblebee stands alone in the Transformers franchise because it has one thing that none of the previous films have – charm. Hailee Steinfeld is a strong actress and even when given a character like Charlie who really doesn’t have all that much dimensionality, she takes the material and runs well with it. Bumblebee is similarly likeable, and the fact that he has a personality (unlike 99% of the Transformers found in the franchise – yes the Decepticons in Bumblebee included) and a unique “voice” means that the audiences will be rooting for the two to succeed.

Of course, the business end of Hasbro isn’t neglected, and for action fans, there’s more than enough (discernible!) rock ‘em sock ‘em sequences in the film, and the slightly bittersweet ending does set up the potential for other “prequel sequels” to follow this one. If they are in the same vein as Bumblebee, however, that really won’t be a bad thing at all.