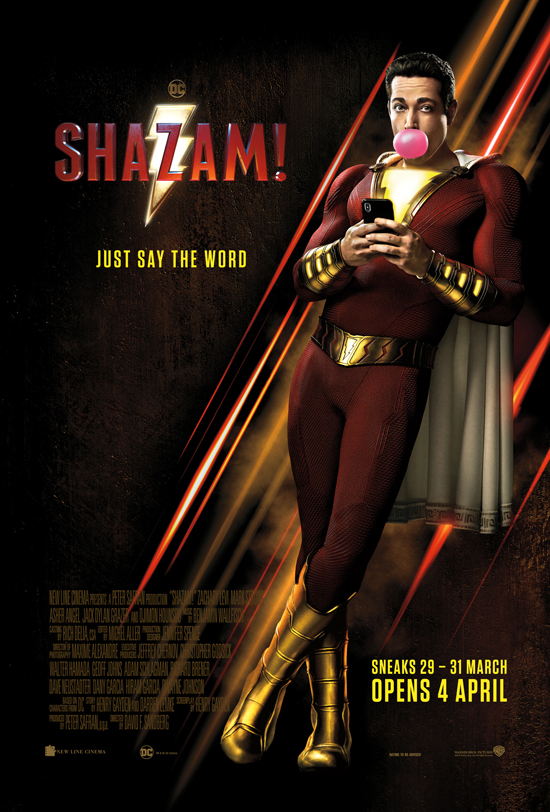 Synopsis: We all have a superhero inside us, it just takes a bit of magic to bring it out. In Billy Batson’s (Asher Angel) case, by shouting out one word – SHAZAM! – this streetwise 14-year-old foster kid can turn into the adult Super Hero Shazam (Zachary Levi), courtesy of an ancient wizard. Still a kid at heart – inside a ripped, godlike body – Shazam revels in this adult version of himself by doing what any teen would do with superpowers: have fun with them! Can he fly? Does he have X-ray vision? Can he shoot lightning out of his hands? Can he skip his social studies test? Shazam sets out to test the limits of his abilities with the joyful recklessness of a child. But he’ll need to master these powers quickly in order to fight the deadly forces of evil controlled by Dr. Thaddeus Sivana (Mark Strong).

Review: It’s hard to feel any ill-will towards a movie like Shazam! – it is after all one of a very few superhero movies that truly embraces fun, uncynical humour, and wonderment, something that’s hard to find particularly in the DC Extended Universe. On a whole, superhero movies have become increasingly self-important and weighty (one need look no further than end April’s Avengers: Endgame and June’s Dark Phoenix for examples), but Shazam! makes no pretense of what it is – a lightweight and largely enjoyable romp – and it’s this awareness and the willingness to take the concept and really run with it, that makes Shazam stand out from the rest of the crop for 2019.

Much of the film’s charm comes directly from Zachary Levi’s high-energy performance, who is entirely believable as a wide-eyed teenager awkwardly trapped in a (super)man’s body, and recalls Tom Hanks in Big, which the film is obviously paying homage to (it even has a sequence that references an iconic scene in Big). On top of that, both teenage actors Asher Angel and Jack Dylan Grazer (playing his disabled foster brother Freddy Freeman) share a great onscreen chemistry, and Grazer in particular also manages to steal the limelight in many scenes that he shares with Levi, no mean feat for sure. Together the trio turns the usually generic “superpower discovery phase” of an origins movie into a refreshing, laughter-filled segment. This is easily the most fun I’ve had in a superhero movie in quite some time, and unlike the higher-rated Deadpool 2, this is a film that the whole family can enjoy.

Where the film falters slightly is in its vanilla villain Dr Thaddeus Sivana, played mostly straight by Mark Strong, and the eventual showdown between Shazam and Sivana. These fall firmly into a been there, done that groove, and it is mildly disappointing that film ends up with a somewhat lackluster final reel, and in particular an 11thhour plot development is surprising but also doesn’t feel all that well thought-out.

It’s clear that Shazam! isn’t aiming to be on par with the “true” superhero films this year, and its release schedule (being bookended by two very big Marvel films) is indicative of Warner Bros’ strategy – comedy first, superhero film second. Shazam! is pretty much like its titular character, as while it doesn’t take itself all too seriously, can still pack a pretty decent punch.