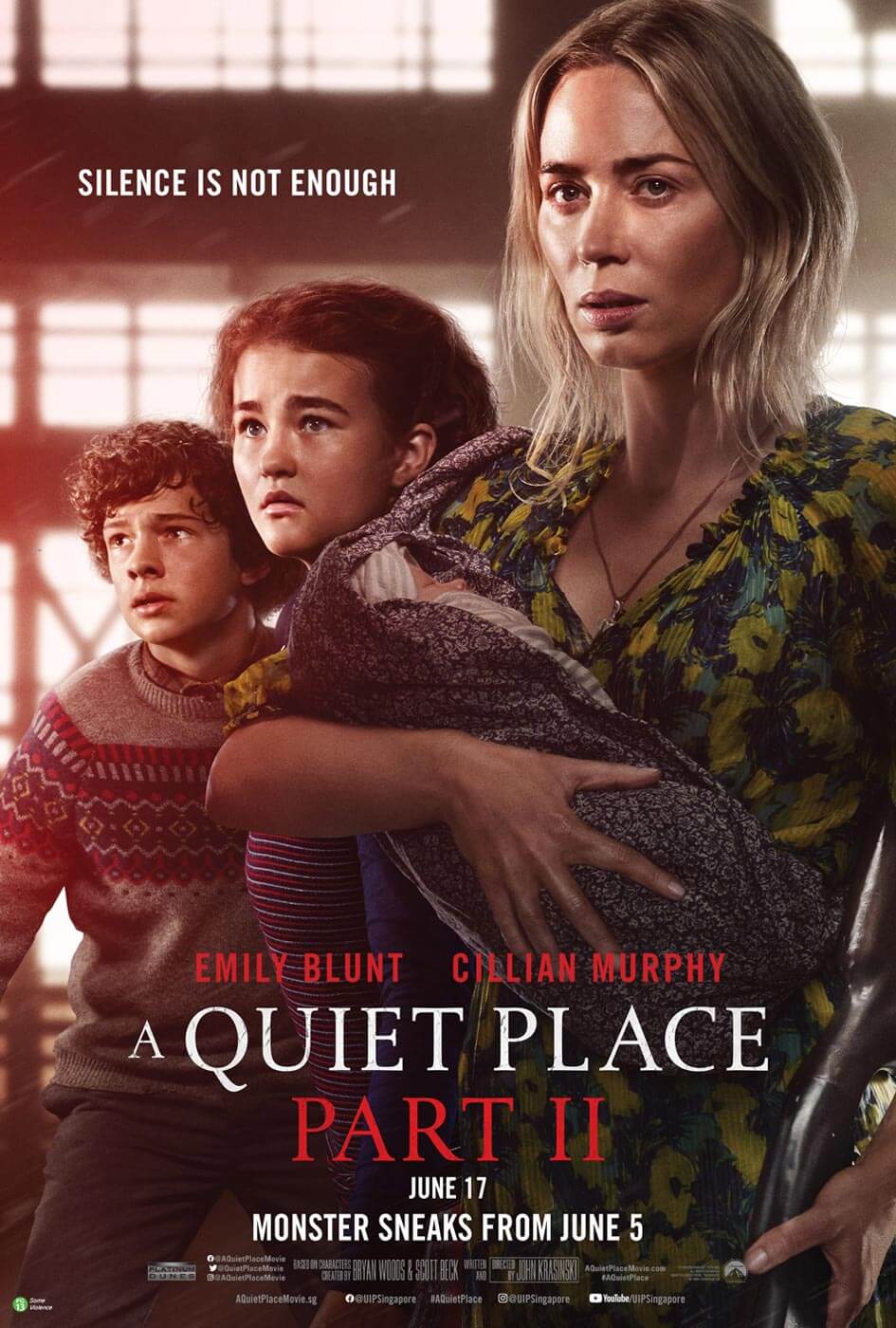 Synopsis: Following the deadly events at home, the Abbott family must now face the terrors of the outside world as they continue their fight for survival in silence. Forced to venture into the unknown, they quickly realize that the creatures that hunt by sound are not the only threats that lurk beyond the sand path.

Review: When A Quiet Place was released in 2018, it was one of the freshest takes on the horror genre I had seen in a very long time. While the premise wasn’t groundbreaking, it was a masterclass in horror done right, without having to resort to jump scares and other cheap tactics. Add to that an excellent performance by the ensemble cast, and it was easy to see why A Quiet Place did so well at the box office. It didn’t really necessitate a sequel (and John Krasinski had admitted as much in his interviews for QP2), but at least this next installment manages to retain most of what made A Quiet Place such a great movie, even if it doesn’t feel as original as the first. It’s also one of the best arguments one can make about making their way back to the cinemas – this is a film which really shines when viewed on the largest possible screens with the best sound systems (something that home theatres can only be a weak facsimile of, unless you’re a millionaire). There’s also something special about being in a dark hall and hearing the screams of fellow cinemagoers that again cannot be replicated elsewhere.

There’s great economy in storytelling in A Quiet Place Part II – audiences are dropped right into the thick of things on “Day One”, when the alien invasion happened. This segment is an excellent reminder of what made the first film so good – Krasinski manages to re-establish emotional connections with the Abbott family with minimal exposition, and still creates an excellent, white-knuckle action setpiece that truly delivers. A caveat, however, that A Quiet Place is required viewing beforehand, or little of what ensues will make much sense.

The narrative then cuts to “The Present”, which is almost right where the first movie ended. And here is where the film falters a bit – while the surviving members of the Abbott family all manage to put in relatively strong performances (although Emily Blunt feels a little sidelined with the increased focus on Millicent Simmonds), the new additions to the cast feel less developed and fleshed out, and pretty much exist more as plot devices. Cillian Murphy does a decent enough job as “new” father figure Emmett given the razor thin character development, but Djimon Honsou is really nothing but a glorified cameo appearance. There’s also a couple of plot diversions that I felt didn’t really add much to the mix at all apart from being changes of settings, though overall the film still builds enough momentum, with great thrilling sequences,  for me to overlook all these niggles.

Despite its flaws, A Quiet Place Part II is still compelling viewing, and if there needed to be a sequel to the original film, this is really the best possible iteration one could have come up with. However, it’s clear that it will be increasingly challenging for the films to be built into a franchise, and I cannot imagine that the third film (dated for March 2023) and beyond would be able to outdo or even come on par with its predecessors.