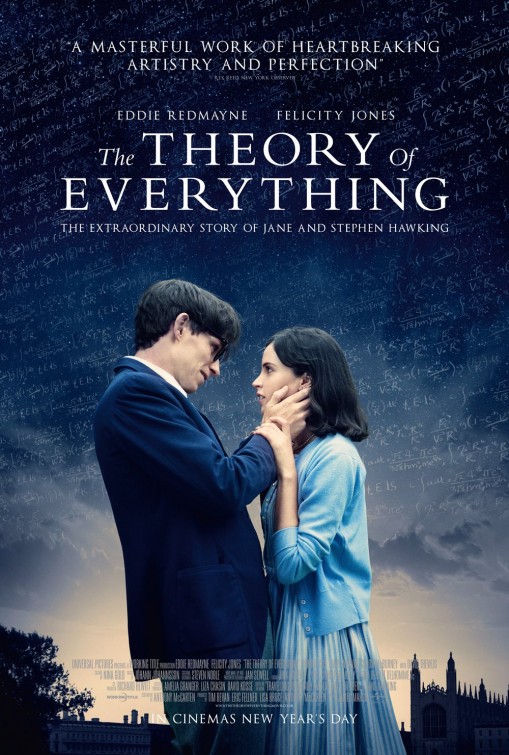 Screenplay: Anthony McCarten, based on the book “Travelling to Infinity: My Life with Stephen” by Jane Hawking

Synopsis: The Theory of Everything tells the story of one of the world’s greatest living minds, astrophysicist Stephen Hawking (Eddie Redmayne), and his marriage to Jane Hawking (Felicity Jones), and their eventual separation.

Review: There’s an inherent difficulty, presumably, when making a biopic of someone who is still alive, and in The Theory of Everything, this is exacerbated since it is about one of the most brilliant minds of our time. There is a reverence in James Marsh’s direction, a restraint in portraying the more negative aspects between Stephen Hawking’s marriage to his first wife, Jane, that makes the film feel detached and a little neutered. Fortunately, Eddie Redmayne’s performance is a spectacular one, so much so that it manages to make the flaws of the film a lot easier to bear.

The Theory of Everything is a well-made film – production values are good and the cast’s performances are all fine, but it all comes across as feeling very safe and conventional. Perhaps due to covering such an extended time period, there are only superficial looks into Hawking’s life and loves, providing as much insight into Hawking as skimming through his Wikipedia entry.

Eddie Redmayne’s portrayal of Hawking is a revelation, rising head and shoulders above the rather mediocre script. An actor with a relatively short CV, there’s nothing in his career prior to The Theory of Everything that suggested his acting capabilities being able to pull off something of this magnitude. And yet he does, not just in his ability to mimic the real Hawking, trapped in a wheelchair and his body contorted and ravaged by motor neurone disease, but in the scenes leading up to the disease becoming full-blown, where little movements suggest the eventual onset of the disease.

Redmayne completely disappears into character and it’s one of those physical transformations that Hollywood loves (in the Oscar wars, he seems to be shaping up to be the one to beat, despite an extremely stacked nominations list this year). When eventually Redmayne has to play the entirely incapacitated Hawking (who has also by then lost his ability to speak), he is essentially acting with just his eyes and is akin to Mathieu Amalric’s seminal performance  in The Diving Bell and the Butterfly. Felicity Jones put forth a spirited performance as Jane Hawking, but no one else really manages to come close to him.

Although the film is based on Jane Hawking’s second memoir about her life with Stephen, the speed at which the narrative goes through the years means that there’s actually very little meaningful conflict between the leads, resulting in a pretty flat narrative tone. This is particularly noticeable in the final reels, when Stephen and Jane’s marriage is on the rocks, because everyone still remains unyieldingly nice and civil towards each other. Treating the subject matter with kid gloves neuters it, rendering some of the scenes less powerful than they should have been. As it stands, while it’s a good, well-made biopic, it probably wouldn’t stand the test of time as being a definitive biopic of Stephen (or Jane) Hawking.